Review: The Sweetness of Life by Kathryn Andrews (Starving for Southern #1) 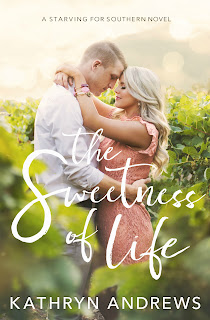 It would be fair to say that Shelby Leigh and Zachary Wolff didn't experience any sort of love-at-first-sight moment when they were set up on a blind date by well-meaning friends. If anything, there was a whole lot of disliking going on. With the date being a bust, you would think that they simply had to go their separate ways, never to see each other again. But when the opportunity of a lifetime forces the food blogger and critic and the former professional football star turned winery owner to have to work together, they know they'll have to set aside whatever feelings of animosity they may have. It's just two weeks, after all, and in that amount of time, they'll need to put their best foot forward if they want to be able to reach their respective goals. But those two weeks turn out to be the perfect opportunity for them to get to know each other in a way they never got to during their disastrous blind date, and the person they find beneath all those protective layers turns out to be someone they more than like. His wine and her food may make an ideal pairing, but will two weeks make Zach and Shelby see they're the perfect pair as well?

The Sweetness of Life is my first full-length read from Kathryn Andrews--her short story, Chasing Clouds, in the Drunk in Love series being my first ever read--and I confess that I'm more than taken by her undeniable gift for writing thoughtful and heartfelt romance. She's taken the enemies-to-lovers trope and given it her own spin, making for a highly enjoyable read, one that brought a smile to my face while also making my heart beat faster in anticipation of how Zach and Shelby's relationship would evolve and transition from two people who couldn't stand one another to two people who couldn't stand being away from each other. Both Zach and Shelby were very real characters and I would have been hard-pressed to find one thing about them that I didn't like. I'm not saying they were perfect, but what they were was familiar, as if they could have been people I would have encountered and gotten to know in real life. Andrews has also made it easy for me to picture The Sweetness of Life as it plays out, like a movie playing in my head, which ensures I'm in Starving for Southern series for the long haul. Five stars. ♥

Purchase The Sweetness of Life on Amazon.