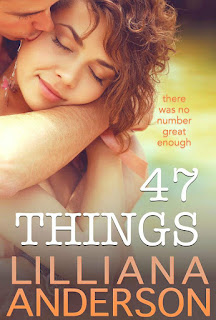 "Sweetheart, if I could help it, I'd be right by your side forever."

"Forever would be the perfect amount of time," I said, wrapping my arms around him and burying my face in his neck.

There's a warning that comes with this novel--and its sequel--about needing tissues. I should have heeded that warning. I should have also not read this in the wee hours of the morning because once I had finished it, I simply had to proceed with the one that followed it. But I shall reserve my thoughts and feelings for One More Thing for its own review. This review is about 47 Things, the first in the series by the same name, and I'm not sure if I can name the exact same number of things that I loved about this novel, but there is no doubt about one thing: this was, hands down, one of the most heartrending and inspiring stories I've come across in a good, long while, and in the process, I've discovered a new-to-me author I'm going to be keeping my bookaholic eye on while checking on her back list as well. This tale may not play out the way many will want it to, but never doubt that it IS a love story.

47 Things is the story of university students Sarah Kennedy and Tyler Lohan, both twenty-one-year-old seniors. Sarah and Tyler have known of each other almost all their lives, but they've never really had any interactions to speak of. They both consider Moama their hometown but couldn't leave it behind fast enough after graduating year twelve to head to Sydney University. Sarah was good with not having Tyler in her orbit; she preferred it that way. But all it took was one stick of chewed up gum and a broken ankle to change the trajectory of their story. For all their years of not being in the same circle of friends in Moama and Sydney, their romance will be forced to fit within a timeline not of their own choosing. When devastating secrets are divulged, Sarah will have to decide if the love she shares with Tyler is one that she's prepared to fight for and if she's brave enough to go up against death.

Sigh. I lost track of the number of quotes I highlighted on my tablet while reading this--bonus points for the Mount Mayon mention--as well as the number of emotions I cycled through as Sarah and Tyler slowly and surely fell for each other and then proceeded to stumble and fumble. But these two stood up and were more resolved in their purpose--to face whatever was before them TOGETHER. Early on, you know that Tyler's hiding something, and me being the paranoid conspiracy theorist that I am, I had a sinking suspicion about what exactly it was he was hiding. This was one of those times that I wish I was wrong...but I wasn't. My heart squeezed in my chest and I shed quite a few tears in the last quarter of this book. Of course, I'm not saying this book was perfect. The hiccup involving Sarah's and Tyler's best friends and the demand for secrecy made me want to smack those two upside their heads.

Some readers may demand that all romance novels have a happily-ever-after, but real life doesn't guarantee those and books are a reflection of real life, so who am I to question why things ended the way they did between Tyler and Sarah. This was THEIR story and I was nothing more than a mere witness to just how turbulent and torturous it could be yet there was always that love that they shared--the very same love that made them see everything through with brave hearts. The very end of the story was exactly how I would have wanted things to be--almost as if, in spite of the inevitable, life went on and Fate made sure that there was that light to show them the way forward. I may not have been able to list forty-seven things that made this book such an experience for me, but if I was asked for a solitary word to describe Lillian Anderson's 47 Things, it would be "extraordinary". Five-plus stars. ♥