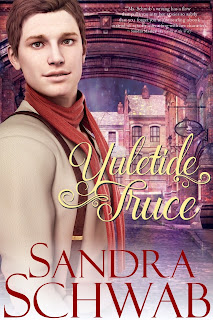 Where I'm from, once the first of September rolls in, the Christmas season officially begins. I'm talking carols, decorations, pre-holiday sales, and so on. What can I say? We love the holidays. So, when the opportunity to read what I think is my first holiday story for the year came along, I was all for it. Sandra Schwab is a new-to-me author, and I thoroughly enjoyed her novella, Yuletide Truce, which is an enemies-to-lovers story set in London and in the span of the eleven days before Christmas in 1845. It's a quick read, but one that had me feeling the holiday spirit.

Eighteen-year-old Alan Garmond, better known as Aigee (taken from his initials), enjoys the holidays as much as the next person, but the latest disparaging column in About Town written by Christopher Foreman pokes at Aigee's newest review on Munro's Magazine and Aigee decides to confront the man. It's clear Foreman doesn't think much of Aigee nor does he give much credence to his reviews, but when Aigee finds Foreman in need of help, he doesn't even think twice. Could this be the inkling of a truce of sorts with the man who insists Aigee call him Kit?

I so did NOT like Kit when he makes his first appearance in the story, which just happens to be the very moment Aigee confronts him in front of the man's peers. However, he did prove himself worthy of Aigee, even if it did take till nearly the end of the book to do so. I liked that there was this tension between the two of them and that Aigee chose not to stand down, even though it was clear that Kit was more worldly and experienced. I wonder how old Kit is supposed to be, especially since I was surprised that Aigee was as young as he was, but this was a tiny niggle.

One of my favorite things about this novella had to do with the author's attention to detail. Schwab has obviously done her fair share of research, and she was able to weave in factual events from that period with her fictional story, and it made for a really great read. Within the limited number of pages, readers get a pretty good idea what kind of person Aigee is and how he appreciates the life he has now, especially considering his personal history. I would have loved to get to know more about Kit, but all things considered, Yuletide Truce was satisfying. 4.5 stars. ♥