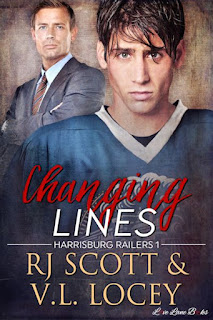 Changing Lines is the first in Harrisburg Railers, the new M/M hockey romance series from the new writing duo of RJ Scott and V.L. Locey. Just like his two older brothers before him, twenty-two-year-old Tennant Rowe has hockey flowing through his veins. There's no denying that he's a talented player, but he also wants to be able to not continue to live in the shadows of his brothers and his more seasoned teammates, which is why he's more than accepting of the trade to the Harrisburg Railers, an expansion team in Pennsylvania trying to make a name for itself away from the two far more popular and established teams in the state. He finds a familiar face in the form of his new coach, thirty-two-year-old James Madsen, who also happens to be a former teammate of his eldest brother's.

Mads left playing the sport behind after he learned of his heart condition, and now his world revolved around his seventeen-year-old son Ryker and coaching. He's happy to have Ten as part of the Railers, and there's no denying that his old friend's youngest brother had done his fair share of growing into a player with promise...and into an attractive young man. But while Mads may be openly bisexual, Ten isn't bi or gay. Right? Soon, though, it becomes clear that Ten's sexuality is something that he's keeping under wraps, but it also allows both men to explore their connection. Can anything come of their relationship, especially when it seems the odds are stacked against them--the age difference, Ten's closet sexuality, etc.? Ten wants to be first line, but can he make Mads first in his life too?

I do love me a well-crafted hockey romance, but I admit that I felt as if there was something missing with this series starter. I'm not saying it wasn't a good read. I did enjoy quite a few parts of the story, especially when it come to Ten and Mads starting off their relationship as coach and player and then figuring out whether to pursue their attraction and later deeper feelings for one another. I also liked the focus put on Ten's and Mads's respective family dynamics since family was such a vital part of who they were. Ten and Mads were easy to like. However, I just didn't have that emotional connection to them, making it difficult to form any sort of attachment or investment in their relationship. The focus on their relationship tapered off in the latter half of the book because it became all about Ten's coming out. I'm going to have to give Changing Lines 3.5 stars but have hopes for book two. ♥