Review: Before I Fall by Jessica Scott (Falling #1) 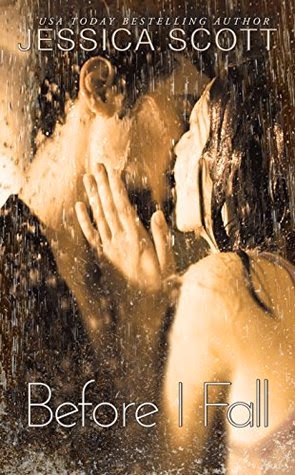 Note: This ebook was provided by RockStar Lit PR in exchange for an honest review.

Beth Lamont knows first-hand what war can take from you. She may never have been in battle but her father is a veteran and she's been battling the VA since her father badly injured his back when she was just sixteen. He isn't getting the medical attention and care that he needs and watching him deteriorate day after day and suffering through the immense pain has made her hate the army. Her father sacrificed himself in order to provide her with a good education and now she sees it as her only way to create a better life for herself and her father.

Noah Warren has returned from serving in the army and is attending college in order to achieve the business degree he promised his lieutenant. He may try to look like any other college student but he bears the scars of his time in the army--physical, emotional, and mental reminders that he isn't like everybody else. He deals with his anxieties and pain with prescribed medication, and while he's aware that he's becoming too dependent on them, he's also afraid that he won't be able to function without them. He doesn't see any other way.

When Beth and Noah meet, it's as tutor and student and Beth immediately makes sure to remain professional even as she's dealing with her dislike of him. He's a soldier, a representative of what she's grown to hate, and she thinks he's cocky. It doesn't matter that he's good looking. She's gorgeous but Noah obviously notices how cold and stiff she is around him. She's made it clear that there will be no hanky panky whatsoever but when Noah sees Beth at the country club, he sees a different side of her, making him all the more curious of her.

The more time spent together, the more Beth lowers her defenses and the more Noah finds himself at peace but when panic hits him, he still turns towards his prescription medication. He's hesitant to tell Beth about his dependence on the drugs, a feeling that grows more when he sees that Beth's own father is addicted to pain medication. When Noah's secret is discovered, will Beth run off, unwilling to see yet another man she loves coping with meds, or will she stay by Noah's side, ready to give him the support and understanding he needs?

Before I Fall is the first book in the Falling series by bestselling author Jessica Scott and is a new adult (NA) romance story about two individuals dealing with the aftereffects of war. While Beth is trying to find some way to get her veteran father the medical attention he needs from the VA after repeatedly getting the runaround, Noah is trying to deal with his PTSD as well as the pain he still feels from his physical injuries. They're both broken souls who may be able to find some semblance of healing from one another but only to a certain degree.

What I loved about the story is that while both Noah and Beth fall in love and are able to begin to want something more and something better for and with each other, they need to make necessary changes and decisions for themselves as individuals. I also appreciated Beth's love for her father and how much she was willing to take on to give him the care he needed and deserved. While the writing had a tendency to be repetitive, its heart remained intact from beginning 'til the end. I was moved and inspired by Before I Fall and am giving it 4.5 stars! ♥