Review: "Born in Chains" by Caris Roane (Men in Chains #1) 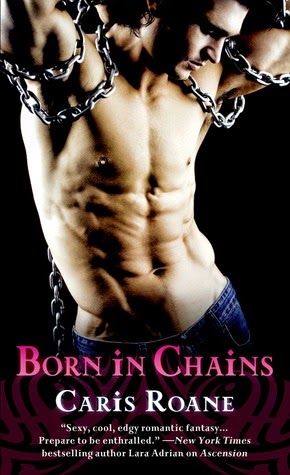 Lily Haven thought she had lost her entire family after her husband, son, and daughter were brutally murdered by a band of vampires. Two years later, she discovers that her son Josh, now ten years old, was actually abducted and is being held captive. In order to get him back, Lily is told that she must form a tracking pair with one particular vampire by binding him to her with blood chains. She isn't allowed to tell anyone about the motivation for her actions and must merely work on finding a much feared object called an extinction weapon as soon as they can, a mission that will prove easier said than done.

Adrien Briggs has been imprisoned by the most powerful and corrupt vampire in their world for the past year. He and his two brothers, Lucian and Marius, have suffered unimaginable torture at the hands of Daniel and his followers. When a human pulls him out of the prison and places blood chains around his neck, Adrien is none too happy because doing what is required of them would mean serving the purpose that Daniel wants. The fact that Adrien hates humans and Lily hates vampires makes their partnership one wrought with distrust. The sooner they do this, the sooner they'll be free of each other.

As much as they initially dislike one another based on their opinions of each other's species, the blood chains they share heighten not just their abilities but feelings and emotions that already exist. The attraction between them is undeniable and they both know that there are certain requirements that Adrien has and that Lily will have to provide. They grow closer and begin to not just trust one another but truly care for each other. However, there's still a lot at stake for both of them, and while Lily doesn't tell Adrien about Josh being kidnapped, Adrien is keeping his own deep and dark secret from Lily.

Born in Chains is the first book in the Men in Chains series by author Caris Roane and a book that I decided to read, along with the rest of the books, since I was approved to read and review the compiled serial that follows this one. I am so glad I'm the kind of reader who needs to read all the books in a series, whether they're interconnected or not, because it introduced me to a new world and set of characters that I absolutely enjoyed and fell in love with. This was such an imaginative twist on the usual vampire-human romance and combines drama, action, mystery, and humor in an entertaining package.

This book opened my eyes to the possibility that vampires do have heartbeats and they are able to breathe and that they're so much more to than the world of vampires than what's been written about in other books. Since most of the characters in the story are vampires, I was happy to see that they weren't one-dimensional, each one having unique personalities that make them all the more appealing. Born in Chains has a strong female heroine who doesn't require an alpha vampire to constantly save her and that's just another reason I love it. This is one of my favorite reads of the year and it gets five stars! ♥