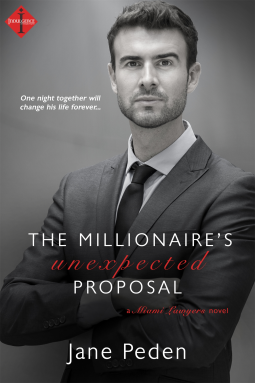 Camilla Winthrop and Sam Flanagan spent two memorable weeks in Las Vegas together five years ago but went their separate ways after Sam abruptly pushed Camilla away. Now, she needs his help. Camilla needs Sam to marry her as soon as possible in order to protect her son JD from being taken away from her by her late husband's estranged parents. She has one ace up her sleeve, hoping Sam won't be able to refuse her once she tells him that little JD is actually his biological son.

Sam is beyond shocked to discover he has a son and he's furious with Camilla from keeping it from him. He agrees to marry Camilla for the sake of his son, but he's formulating a plan to make sure that he will have sole custody of the boy once he and Camilla divorce after the agreed upon one-year mark of their marriage. Sam has all these preconceived notions of Camilla in his head but will he be too late in changing his mind about her once he learns the kind of woman she really is?


The Millionaire's Unexpected Proposal is the first book in the Miami Lawyers series by first-time author Jane Peden. I enjoyed the tension between the lead characters, Camilla and Sam, and it was clear that Camilla was truly a good sister and mother and that she loved her late husband. As for Sam, I must admit that there were times that he could have been the poster child for arrogant jackasses everywhere, but I do understand why he was suspicious of Camilla's motivations.

I appreciated that there were back stories included, especially when it came to Camilla's marriage to Danny Winthrop and Sam's own personal history. They were both great lead characters--wary and flawed yet passionate and caring. I liked that it took time for their relationship to develop to something more than attraction or lust. The role Camilla's sister played had her stealing the spotlight once or twice, helping to open Sam's eyes to his own shortsightedness and prejudices.

This was a well-written contemporary romance and one that I really found entertaining. The legal maneuvering wasn't merely there for display and were, indeed, part of the love story. The supporting characters were also interesting. I think it's safe to assume that the other books in the series will be about Sam's law partners, Ritchie Perez and Jonathon Berrington, and I'm looking forward to reading their stories. The Millionaire's Unexpected Proposal gets 4.5 stars! ♥

Pre-order a copy of The Millionaire's Unexpected Proposal on B&N.