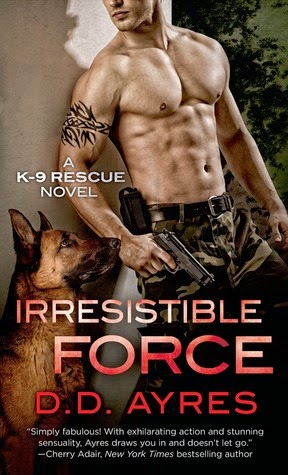 Shay Appleton is trying to move on from her last relationship, a relationship that she ended but it appears that her ex hasn't received the memo. He's stalking her--sending notes, text messages, flowers--and now he's followed her to her cabin. Thankfully, she's got Prince by her side, a dog she decided to personally take in after he was abandoned at a no-kill shelter. Their bond was instantaneous and she wouldn't know what she would do without him.

James Cannon hasn't been able to move on ever since his canine partner Bogart disappeared. He refuses to even consider that his four-legged best friend is dead. Then he receives word that Bogart's been spotted and James goes to the location to check. What he finds is, indeed, Bogart, but when he confronts the woman who he believes dognapped his partner, she tells him that the dog is hers after she adopted him from the shelter he was found at.

Both Shay and James don't trust each other but one thing they do have in common is their love and affection for Bogart. Even after James proves the dog belongs with him, there's something about the feisty but vulnerable Shay that makes him protective of her. She's keeping secrets that appear to have started when she was younger. When Shay begins receiving threats, James and Bogart will need to protect the woman they've both fallen for.

Irresistible Force is the first full-length novel in the K-9 Rescue series by author D.D. Ayres and is a standalone, not having any connection with the novella Necessary Force. This was another good read and I absolutely adored Bogart. I'm a Humphrey Bogart fan so I'm going to assume he was named after the legendary Bogie. ^.^ His love and loyalty for both Shay and James was obvious and he was much more than a police dog in James' eyes.

While I liked James straightaway, it took me a good, long while to feel any affection for Shay. I felt bad for her and everything she had gone and was going through, but the back and forth did get to me after a while. With that said, though, she did prove to be a courageous and respectable heroine in the second half of the book. ^.^ With well-developed characters and a story with action, suspense, and romance, Irresistible Force is getting four out of five stars. ♥

Grab a copy of Irresistible Force on Amazon | B&N | Kobo.