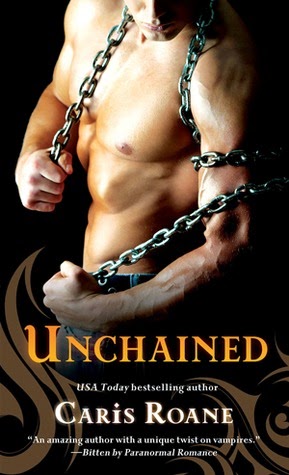 Marius Briggs was the last of Daniel's three imprisoned sons to escape he still isn't free from the feeling of guilt and sense of responsibility that he's carried with him far longer than the year he spent in the hellhole where he and his brothers were tortured incessantly. Now, he's trying to focus his energy on putting an end to his father and everything that he stands for plus finding yet another extinction weapon that Daniel is after. The thing is, in order to track the extinction weapon, he's going to need the help of a human.

Shayna Prentiss is getting read to head over to Malaysia as part of her anthropological studies, but when a vampire abducts her and takes her back to his world to help him on his mission that will save not just vampires but humans as well, Shayna's plans change. Her curious nature sees how fascinating the world of vampires is but her curiosity appears to be most piqued by the one she's now bound to with blood chains. The anthropologist in her can't fully comprehend what it is that's going on between the two of them.

Like his brothers Adrien and Lucian and their tracking, and now lifetime, partners, Lily and Claire, Marius and Shayna experience the bond between them because of the blood chains, except that theirs appears to be on a higher and more powerful plane. With their powers and feelings even more magnified, Marius and Shayna need to work together to figure out what Daniel's endgame really is and if they're prepared to risk everything to finally put a stop to the greatest threat that both their worlds will ever have to face.

Unchained is the third novel in the Men in Chains series by bestselling author Caris Roane. I'm not sure if this is the final book in the series since all three Briggs brothers now have their stories told. I would be interested to read stories on the supporting characters that were featured in all three main novels, but am still satisfied if this is truly the end for the series. I enjoyed reading about Marius and Shayna, especially since it appears that their particular combination was much more potent compared to the first two.

I'm going to honest and say that Shayna was not my favorite heroine and that I found her chemistry with Marius a bit lacking at times. Of course, Lily and Claire (and even Angelica from the novella compilation) set the bar high, and while Shayna did shine a great deal, it still took me awhile to warm up to her. Marius, on the other hand, was a strong but sensitive hero, someone who loved his brothers unconditionally and had unbelievable potential to be greater than he thought possible if he would only see himself as worthy.

I truly did enjoy reading the four books in the Men in Chains series and devoured them in less than two days. The books were highly addictive and now I feel myself going through yet another series hangover, something that only happens when I've fallen in love with an entire series instead of just one particular book. If you're looking for paranormal romance books that take the stories and characters up a few notches, I recommend you check out this series. Four stars for Unchained and 4.5 stars for the series! ♥

Grab a copy of Unchained on Amazon | B&N | Kobo.