Review: "Under Different Stars" by Amy A. Bartol (Kricket #1) 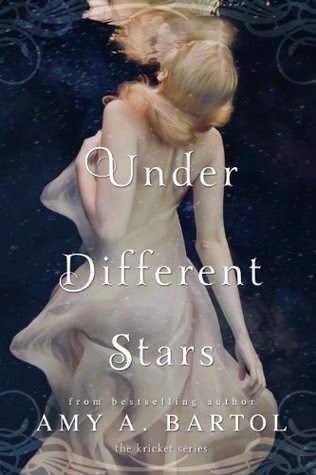 "You cannot thrive under the wrong stars, Kricket," Trey says in a calm, soothing voice. "The stars here are in opposition to you...can't you feel it? You are foreign to them. You have no ancestry here--no lineage. Let us take you home."


Kricket Hollowell makes a one-worded wish: "Home." The stars have never aligned for her, losing her parents and then living her life in the foster care system she's now running from, seventeen-year-old Kricket has learned to be independent in the city of Chicago because she was left with no other choice. When her wish comes true in the form of two separate says of three young men telling her she's to return with them back home, the world as Kricket has known it changes forever, whether she wants it to or not.

Trey Allairis is on Earth on a mission: to apprehend Kricket and return her to the Rafe clan on Ethar. He realizes quickly enough she's nothing like he expected. She questions his authority and won't be cowed to do his every bidding. They push each other's buttons but he's fascinated by this half Rafian, half Alameedan girl and becomes increasingly protective of her. Once they reach Ethar, Kricket's safety becomes an even more pressing matter and Trey realizes it's no longer about duty but something more.

To be perfectly honest, and this honesty is probably going to make quite a few people who've already read this book want to smack me upside the head, this title was never on my to-be-read list. I had never heard of it before and the decision to finally read it was based on my request on NetGalley to read and review the sequel (whose description captured my imagination immediately). Now that I've read Under the Stars by Amy A. Bartol, please feel free to tell me what an idiot I've been because this book was absolutely epic! ♥

If I had to rank science fiction romance novels on my list of preferred and favorite genres, it would definitely fall somewhere in the bottom half. I'm not saying I dislike it; it's just that there are other genres I tend to gravitate to and sci-fi isn't an automatic choice. But author Amy A. Bartol was able to rein in my attention from the beginning and everything about this book simply kept getting better with each passing page. The action, suspense, and romance drew me in and refused to let go even after I was done reading.

Kricket is an orphan living on her own in Chicago, trying to stay off the city's foster system until she turns eighteen. When she's abducted by Trey and his team, she 's beyond shocked to be told that she's not human and that she's actually a combination of two different clans from Ethar. She becomes a high value target when powers she inherited from her Alameedan priestess mother manifest but she refuses to go with Kyon, an important member of that particular clan and someone who claims Kricket is his intended.

Trey tries to keep things professional with Kricket, especially since he has an intended of his own. But in the amount of time they spend together, Kricket develops feelings for him but Trey insists that he merely sees her as a friend and nothing more. With Kricket falling for Trey but Trey essentially placing her in the friend zone and Kyon constantly trying to convince her to return to Alameeda with him but Kricket insisting she isn't interested, you've got a love triangle that's creatively complex and fraught with tension.

I loved the romance aspect of the book, but shockingly, I loved the science fiction aspect in equal measure! The author has weaved together a world that is imaginative yet feels somewhat familiar. Even some of the Etharian words can be deciphered without too much difficulty. Aside from Kricket and Trey, I also adored Jax and Wayra, Trey's fellow Cavars and closest friends. Under Different Stars is in a class all its own. A favorite for 2015, I'm giving it five-plus stars. I highly recommend you read it if you haven't already! ♥♥♥

Grab a copy of Under Different Stars on Amazon | B&N.