Review: "Kiss and Make Up" by Serenity Woods 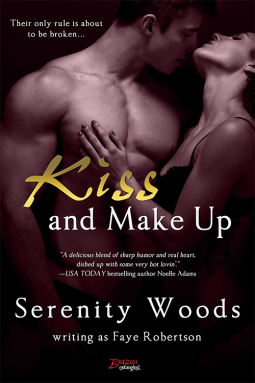 Tabatha "Tabby" Rogers is thrilled to be able to work as a make-up artist on the set of a movie in New Zealand. She may have only stepped in as a replacement for the original lead make-up artist who had to leave the production due to an accident but she's well aware of the opportunity that's been presented to her. She'll be working for a month and the experience will be a definite highlight on her portfolio. Then, she'll be off to London to check out the city before beginning her scholarship at a known make-up school.

Elijah "Eli" Black is good at his job as a stuntman and the movie he's currently working on in his home country of New Zealand is wrapping up in a month or so. His end goal has always been to keep his promise to his late brother Charlie and head to LA to break into Hollywood. After his last relationship ended because his ex wanted him to give up being a stuntman due to the dangers, Eli's wary of being with anyone who may be overly protective or overly cautious. His focus needs to be on fulfilling a deathbed promise.

When Tabby and Eli meet, there's instant chemistry, but after relationships that had them feeling pressured to choose their exes over their passion for the jobs, they're hesitant to get involved with other people. Eli's also known for not dating anyone he works with, but there's something about Tabby that makes he want to break his own rule. What's supposed to be a month-long fling becomes more. Will Tabby and Eli have to set aside their own dreams in favor of the other's or will they go their separate ways?

Kiss and Make Up is a standalone novel by Serenity Woods published under the Brazen imprint of Entangled Publishing. This was originally published under the company's Indulgence imprint in 2012 and was written under the author's pen name of Faye Robertson and had two different covers. This is my first time reading Tabby and Eli's story and it was both fun and poignant, never lacking in sweetness or steam. They were strong characters who didn't want to be rushed into anything but knew they'd be good together.

This was a well-written love story and one that makes you think about what you're willing to do to go after your dreams and discerning which ones are truly worth pursuing. Whether it's your dream job or dream partner, sacrifices have to be made and they need to be made out of love, not out of obligation. Putting together highly likable characters, both lead and supporting, wrapped in well-paced and well-written story, Kiss and Make Up by Serenity Woods is a book worth curling up with this weekend. 4.5 stars! ♥

Pre-order a copy of Kiss and Make Up on Amazon | B&N | Kobo.