Review: "Sugar on the Edge" by Sawyer Bennett (Last Call #3) 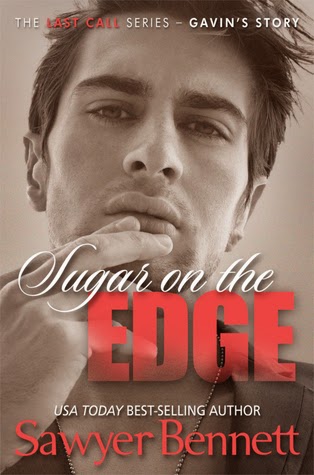 Brit Gavin Cooke is a bestselling author who has been living the his life in darkness for far longer than he should, masking his pain with too much alcohol and emotionless sex. He's been sent to North Carolina by his agent in order to focus on the manuscript whose deadline is a mere two weeks away. When he meets his new housekeeper, he finds himself distracted by her beauty but knows all too well that she's not his usual type. She's too shy and naïve, a combination he's never been attracted to...until now.

Savannah Shepherd's passion has always been photography but she's been stuck either taking photos for the local newspaper or being the assistant to a photographer who seems to think it's okay to sexually harass her. In need of more income, she also sidelines as a housekeeper, something she finds herself doing more of once she loses the gig at the newspaper. Meeting her latest client has her feeling awkward and wary, especially since he likes to push her buttons and points out that she's an anti-heroine.

Sugar on the Edge is the third novel in the Sawyer Bennett-penned Last Call series. Here we have nice and naughty, Savannah and Gavin, aka Sweet and Filthy, respectively, getting together, even as they think they've got each other pegged as just that--nice and naughty. But they're multi-layered characters that simply needed the right person to lure the other facets they never knew they had out in the open. Sweet can be quite filthy and Filthy can be awful sweet when they're comfortable in their own skin.

As I was reading the book, I found myself wondering if these two were going to have their happily ever after without anything major challenging them. And then BAM! There it was. I actually had a feeling it was going to be the point of conflict early on in the story but forgot about my little hypothesis as I read on. Gavin's initial reaction wasn't too much of a shock but what followed had me wanting to reach out and smack him upside the head. I felt bad for Savannah but loved how Brody is truly a good guy.

With each book I read, the more invested I become in Last Call series. I like that feeling of familiarity I have with the cast of characters initially introduced in the first book and how I want each one of them to have their own story told. Sugar on the Edge was sweet, steamy, and sentimental and witnessing how both Savannah and Gavin grow as individuals and then as a couple showed that having the person meant for us can bring love and light and lead us out of whatever darkness we're trapped in. 4.5 stars! ♥

Grab a copy of Sugar on the Edge on Amazon | B&N.