Review: "On the Rocks" by Sawyer Bennett (Last Call #1) 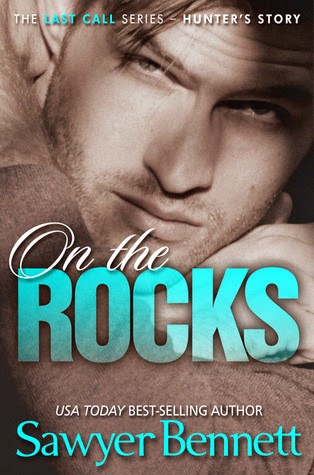 When she was eighteen and just hours after her high school graduation, Gabby Ward got to kiss the one guy she's been in love with for years--her best friend's older brother, Hunter Markham. Even though he kissed her back, she ended up with her heart broken when he pushed her away and rejected her in the worst way possible--by going out with another girl. From that moment, she vowed to safeguard her heart from the likes of Hunter and would spend the rest of her life keeping her distance, ending their friendship.

Five years later, Hunter has made his return to his hometown to welcome back his twin brother Brody after his incarceration for vehicular manslaughter. He's been away, competing in the professional surfing circuit and retired as the second ranked surfer in the world. His retirement may appear premature to many but he did it to be with family. Now that he's home, he knows he's going to be seeing more of Gabby, the girl he rejected and gets into verbal tussles with the rare times he's seen her over the last five years.

Having been awarded the contract to work on Last Call, Hunter's bar, Gabby wants to prove that she's more than capable of doing a good job. She's worked hard to maintain the same quality of work her late father's construction company is known for. Being around Hunter is awkward but when he starts flirting with her, Gabby isn't sure what the heck is going on. Hunter's rejection of her five years ago hurt her and now he's ready to put in the time to make amends and to convince her that they're meant to be together.

On the Rocks is the first book in the Last Call series and the first one by bestselling author Sawyer Bennett that I've had the pleasure of reading. This was a new adult (NA) novel that was a combination of a friends to lovers, enemies to lovers, and second chance romance all wrapped in one intoxicating story. The main characters have known each other since they were children and used to be friends until he breaks her heart. Five years on, they're no longer friends but the attraction they both share is still very much there.

I liked Gabby and totally understood where she was coming from in terms of her anger toward Hunter. To be eighteen and in love with your best friend's older brother only to have him reject you in such a painful manner would leave any girl with residual negative feelings. Hunter did what he felt was necessary because of her age and the fact that they considered each other as family but I'm sure there must have been some other way to get his point across. I'm glad she made him work to win back her friendship and affection.

Aside from the main characters, the book has an interesting array of supporting characters that I'm sure will have their own love stories told in the other books (which I've already lined up to read after this one). This simply means that this book did it's job--it captured my attention and made me fall in love with the story and characters and made me want to read about everyone else who comprised the circle of family and friends. I thoroughly enjoyed On the Rocks and am ready to dig in to the rest of the series. 4.5 stars! ♥

Grab a copy of On the Rocks on Amazon | B&N.