Review: "Chains of Darkness" by Caris Roane (Men in Chains #2) 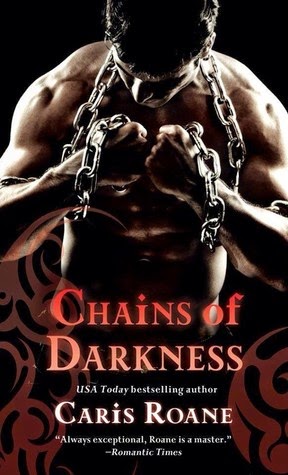 Lucian Briggs has been freed from the prison and chains that held him for a year along with his brothers Adrien and Marius by a human named Claire Turner. She's been told that Lucian will be able to help her find her friend Zoey, who's been sold into sex slavery. They'll both be required to don blood chains to fortify their partnership as a tracking team. In return for helping to locate Zoey, Claire will help Lucian find another extinction weapon that is reported to be hidden somewhere different from where the first weapon was located by his brother Adrien and Adrien's partner Lily.

Even prior to his imprisonment, Lucian has suffered tremendously at the hands of his father Daniel, an evil vampire bent on taking over the entire vampire world. Daniel has also murdered Marius and tortured Zoey to death, making Lucian and Claire even more determined to rid the world of both the second extinction weapon and Daniel himself. Aside from their task as tracking partners, Lucian and Claire are dealing with the effects of the blood chains, magnifying the confusing feelings they already have toward each other as well as allowing them to hear each other's thoughts.

Lucian suffers from blood madness, a result of his father's machinations while his sons were in prison. Being with Claire has helped open his eyes to the possibility that there is light and laughter in his world, a world that's known nothing but darkness and pain for far too long. When all is said and done, will Lucian and Claire be able to accomplish their mission and then readily let each other go or will their closeness be exploited by Daniel, whose powers as an Ancestral are so great that he's more than aware of just how much his son and the human woman are beginning to mean to each other.

Chains of Darkness is the second book in the Men of Chains series and focuses its attention on the vampire-human tracking duo of Lucian Briggs and Claire Turner. While similar to the first book, Born of Chains, in terms of a Briggs brother and a female human joining forces to look for an extinction weapon and falling for one another, this particular book brings to light blood madness and how it requires the sufferer to be chained down in order to not hurt himself and others. Also, compared to Lily Haven, Claire Turner is a more lighthearted characters, able to make Lucian laugh.

With a fascinating mix of romance, action, and thrills in a gorgeous paranormal package, Chains of Darkness gives a fresh take on vampires and does so quite well. As has been the norm with the first novel and the compilation novella, the female characters are rarely helpless and the partnership between them and their vampire counterpart highlights a balance of sorts and the need for them to work together. Even supporting characters like Gabriel, Rumy, and Eve capture a reader's interest, making for a well-developed cast to carry out an original story. This gets 4.5 stars. ♥

Grab a copy of Chains of Darkness on Amazon | B&N | Kobo.