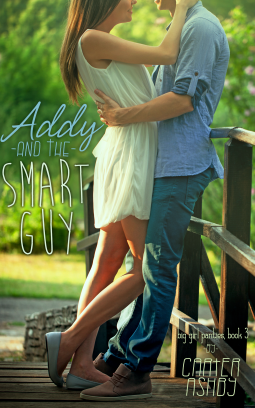 Addison "Addy" Hart may look like a demure and straight-laced graduate student and teaching assistant but if people could only the thoughts in her head whenever she looked at Dr. Greyson "Grey" McDaniel, they'd be in for a surprise. For the past three years, she's loved and wanted only him, but she believes he only sees her as his student, nothing more. When he surprises her with a round-trip ticket and a week in his cabin, she's beyond shocked but quickly realizes this may be her one shot at finally being with him.


Grey has wanted Addy for far too long, but the fact that he's a professor and she's a student and the twelve-year age difference between them have made him more than hesitant to pursue anything with her. Until he decides to throw caution to the wind and invites her to spend one week with him at his cabin. But all he can offer her is a short-term affair, nothing more, because he doesn't believe in love, commitment, marriage, and a family and he knows those are things Addy not only wants but absolutely deserves.

Upon their return from their week-long vacation together, the two try to return to the way things were but when Grey is accused by a student of sexual harassment and their relationship is dragged into the open, Grey must decide if he's ready to have something more long-term with the only girl he's had feelings for. On the other hand, Addy must step back and see if she wants to live with what Grey has to offer or if she wants to fight for something more permanent and committed with the only men she's ever loved.

Addy and the Smart Guy is the third novel in the Big Girl Panties series by author Carter Ashby and is a teacher-student romance with some family drama thrown into the mix. As is the norm for the series, there's humor in the story, especially when Addy's best friends, Zoey Odell and Maya, and their boyfriends, Kellen Bradley and Jayce Gilmore, the lead characters from the first two books, respectively, are around. The humor is a good counterbalance to the drama that often surrounds Addy and Grey.

This was a good addition to the series and if it's the last one, since all three friends have already had their stories told, then it was a great way to end the series. Each book raised the bar and this third book was able to show the complexity in a relationship that was already hampered by the fact that it was between a teacher and a student and that one of them had commitment issues stemming from his childhood. I enjoyed Addy and the Smart Guy and the Big Girl Panties series as a whole. This gets 4.5 stars. ♥

Pre-order a copy of Addy and the Smart Guy on Amazon.