Review: After I Fall by Jessica Scott (Falling #3) 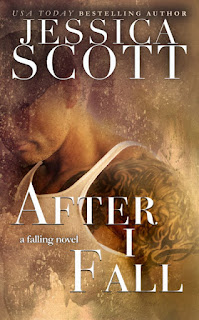 Jessica Scott's Falling series proves that while military romance is her niche, she's able to take it a step further, writing about the men and women who served but are trying to lead "normal" lives outside of their time in uniform. If you're familiar with the series, Eli Winter and Parker Hauser should be easily recognizable. Eli was "Eli the Bartender" and Parker was "Parker Poster Girl" in the first novel, Before I Fall, and only briefly appeared in the series starter. It was in the second novel, Break My Fall, in which both were more prominently featured, and now their paths cross in After I Fall. She's a college student engaged to a junior congressman, much to the approval of her father, and he's the owner of the highly successful The Pint, a bar that caters to veterans and servicemen as well as more affluent clientele, and a former army officer. Both have secrets that they'd rather keep hidden, but from the moment they meet, it's as if the other is the only one who can see who they truly are. They're falling for one another, but Parker has never had anyone catch her before, and Eli's demons may prevent him from doing so.

I wasn't much of a fan of Parker's in the second book, mainly because she came off as a know-it-all but there was something about her by the end that had me curious. Here in book three, she's clearly more than the very opinionated student who seemed to be ready to engage in a debate. She was dealing with a father who only seemed to remember she existed because of who she was set to marry and a fiancé who was all about appearances and getting ahead. She belonged to a very different world than the one Eli existed in. Speaking of Eli, I'm so glad that he finally gets his happily-ever-after because the man deserves it. He's always there for those who need someone to lean on, and his care and concern isn't some sort of PR thing to make himself look better. These two had cracks, but neither one was what I'd call broken and thankfully so because they had enough on their plates. I liked the immediate and constantly strong connection these two had, making it easy to see why they had become so close in the short amount of time they'd known each other, making them fully invested in one another.

Part of the reason why I love Jessica Scott's books are that the romance is at the center of the story, but both main characters are facing battles that they need to overcome if there's any hope for them to have a future together. There's a depth to her story and Scott is more than capable in putting it into words. I felt for both Parker and Eli, but I confess that it was the latter with whom I felt a tad more empathy simply because he had tried to be everything to everyone else around him for so long. Of course, this doesn't mean that he didn't have anyone until Parker came along. He had the family he had created for himself at The Pint, but I guess his relationship with Parker was something he didn't know he wanted or needed. He deserved to have that one person who would never turn their back on him and would love and accept him, battle scars and all. Aside from their story, there was just enough attention on Deacon and Kelsey to have me wonder what their story will be like when Catch My Fall is released. The Falling books can be read as standalones, but I highly recommend all three. Five stars for After I Fall. ♥

After I Fall (book three) - five stars - My Review (posted above)

Purchase After I Fall on Amazon | B&N | iBooks | Kobo.