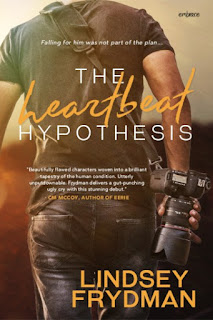 “She’s dead, Audra. Don’t get me wrong, okay? I think it’s nice that you want to redo her done-it list, but she’s not here anymore. She won’t get to do anything ever again. It doesn’t matter how she died, because she’s gone. No one can undo that. Not me. And definitely not you.”

Well now... Who shall I go to in order to receive some sort of refund for the tissues I used up while reading this book--Entangled Publishing or new author Lindsey Frydman? And seriously? This is a DEBUT release? Gah! Based on the synopsis alone, I had a feeling this was going to be a heavy read, but this put my emotions through the wringer and not just because of a couple of unexpected twists. Frydman's storytelling made it difficult for me to do anything but keep reading, becoming further invested in the tale of two young people who are struggling to find their footing amidst love and loss. The Heartbeat Hypothesis is already my favorite debut release so far this 2017.

Two years ago, Audra Madison received the miracle her parents were hoping for--a heart. Now eighteen and a freshman in college, Audra has recently decided to go through a "done-it" list her heart donor chronicled online. She only has one person in mind to help her document her own journey and that's none other than twenty-year-old photography student and college junior Jake Cavanaugh, who just happens to be the older brother of her heart donor. Though Jake agrees to Audra's plan, they're both hesitant and wary with each other in the beginning. Soon, however, they become closer, developing unexpected feelings. But will the secrets they keep end things abruptly?

The title of this standalone comes from an actual hypothesis that states each person has a limited number of heartbeats. In the case of Audra, who was born with a hole in her heart, she was given an extension on what should have been a limited life, thanks to Jake's sister who one would never have guessed would pass away at the age of seventeen. Audra wants to have purpose, to make good use of this new second burst of life she's been given. On the other hand, Jake doesn't need to have purpose and that's because he doesn't really see the point in having one. When their lives intersect, it's as if the timing is so they do slowly realize they give each other purpose.

So much of this story was a surprise to me. The author could have chosen to go the tried and tested sweet and sappy route, but with her deciding to lead her characters--and therefore her readers--down a series of less conventional paths, she's set The Heartbeat Hypothesis worlds apart from others in the genre. Audra and Jake--as well as a few other supporting characters in the story--reminded me that life comes with no guarantees and that every breath we take, every moment we create, and anyone who touches our lives are to be cherished and made the most of. I'm giving this five-plus stars and am now eagerly anticipating what Lindsey Frydman has for me next. ♥