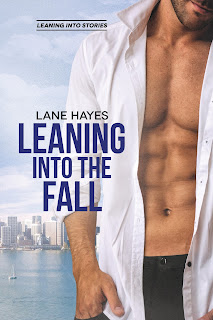 "I love you. I shouldn't have told you I didn't believe you. It wasn't you I didn't believe in. It was me. It wasn't you I didn't trust. I didn't trust myself. I wish I knew how to write a sonnet. Or a song. Or a poem. Right now, I would say something witty and amazing about standing in the rain and how beautiful you are. Your heart, your soul...the things you've learned about love, loss. I'm humbled by your strength. I wish I was worthy. I'm not. But I want to be."

And just like that, whatever preconceived idea I had of Nick Jorgensen I had in my head after "meeting" him in Leaning Into Love has been shattered to smithereens with Leaning Into the Fall, the second release but the first full-length novel in author Lane Hayes's Leaning Into series. I wasn't a fan of how he handled things with both his then-fiancée and his best friend with benefits. He came off as a complete douchebag, and I'm pretty sure I'm not the only one who thought so. But here, Hayes has managed to make a character who was difficult to tolerate someone who was difficult to turn away from. There was a lot more to Nick than meets the eye and to see him unexpectedly find that one person outside of his tight circle of friends who genuinely accepted him and probably even understood him far better than his closest friends did was rather wondrous and had me sighing satisfactorily.

At thirty-one, Nick Jorgensen has achieved a lot of success courtesy of his patents and the company he founded with one of his best friends. Not bad for someone who was looked at by his own father as nothing more than an aberration. Nick knows his mind works differently from many of those around him, making him come off as socially awkward to some. Maybe that's why he isn't fit for a committed relationship, which is a good thing he ended his engagement when he did. He's moved on since then. But when the winery he ordered ten cases of wine for the wedding refuses to take them back, Nick heads to Napa Valley himself and confronts owner Wes Conrad, who turns out to be a silver fox Nick is instantly attracted too--an attraction that's very much mutual, save for the snarkiness between the two. The quirky Nick and laid-back Wes could find love if only they'd dare lean into the fall.

I couldn't get enough of these two. They were so different yet were so damn right together. I felt this odd kinship with Nick--maybe because I've been called weird, both jokingly and not, and am sometimes stuck in my own head, overthinking things and worry about problems that aren't really problems or can wait to be resolved later on. Wes was exactly who Nick needed in his life and Nick was someone who sparked life back into Wes's dormant heart. The vibe between them would go from light and airy to heavy and angsty, but shouldn't relationships be like that? You know, the kind where you can be yourself and you're there for one another in spite of whatever comes your way, whether good or bad? There story made my heart squeeze for all the best possible reasons, and now I can't wait to see who's tale is up next. Leaning Into the Fall is one of my favorite reads for 2017 and gets five-plus stars. ♥

Purchase Leaning Into the Fall on Amazon | B&N | iBooks | Kobo.