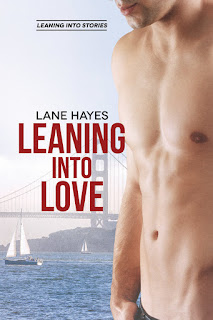 Originally released as part of the multi-authored It Was Always You anthology late last year, Leaning Into Love is the first book in a new collection of stories from author Lane Hayes entitled Leaning Into. Classmates in high school belonging to very different crowds, Eric Schuster and Zane Richards, both thirty and gay and bi, respectively, only became closer in college and more so after graduation. Eric's friends with benefits relationship with his business partner ends when Nick Jorgensen becomes engaged to be married to the daughter of an influential businessman. Zane and Eric attend the engagement party that leads to them hooking up. Soon, they move from being best friends to dating, but it's a change in their relationship they keep quiet. When a lucrative sponsorship is put at risk by Nick's failed engagement amid claims of being in love with Eric, Eric will do anything to save Zane's sponsorship.

I re-read this novella and I'm glad that I did because it contains bonus content that I think wraps up Eric and Zane's love story in the neurotic yet adorable way that it was meant to. This was a quickie of a read, but we get just how close Eric and Zane are as friends and how they're friendship began all those years ago. It was also interesting to see how Eric's relationship with Nick, who also happens to be one of his closest friends, is like, especially since it was pretty clear Eric had deeper romantic feelings than Nick did. Remember, these three men are all part of a very close circle of friends, so trying to see where Eric and Nick's friendship, Eric and Zane's romance, and Zane and Nick's friendship will end up was part of why this was such an interesting tale. Even though Nick was somewhat of a douche, I'm curious to see how he would fare once he finds his own true love. Five stars go to Leaning Into Love. ♥

Purchase Leaning Into Love on Amazon.