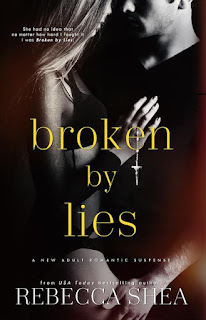 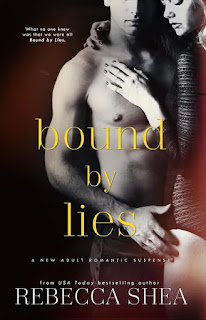 Note: These ebooks were provided by the author via InkSlinger PR in exchange for an honest review.

The Bound & Broken series from bestselling author Rebecca Shea currently consists of Broken by Lies and Bound by Lies, two books which need to be read in order because the the latter is the sequel to the former which ends in a cliffhanger. Prior to these, I had only read one other Rebecca Shea-penned novel, but talk about having a realization! These books showed me just how on-point the author is when it comes to romantic suspense, giving readers equal amounts of both elements while carrying over the notable storytelling she employs in the first book onto the second one. You can't help but become invested in all three of the characters who capture your heart and imagination, wishing for happy ending for each one, but knowing that somehow, that's would be an impossibility.

In Broken by Lies, we meet the main players of this duet--twenty-one-year-old Emilia Adams, twenty-seven-year-old Alejandro Estrada, and twenty-seven-year-old Samuel Cortez. When Emilia Adams loses her mother, she decides to travel to Arizona to try and locate her estranged father. With very little to her name, she's nearly at the end of her rope when she meets Alex Estrada, who offers to help her out. They're equally smitten by one another, but Alex knows he could never expose Emilia to the seedy world his family belongs to. Then there's Sam Cortez, a federal agent who's making his presence felt and has his own reasons for wanting to get close to Emilia. When secrets are revealed, what will be left of Emilia, Alex, and Sam and what will all three remain standing in the end?

In Bound by Lies, the aftermath of the events in the first book are laid bare, and Emilia is truly at a loss as to where her life is now. Alex's love for Emilia overrode his own loyalty to his father and everything he built and led with an iron fist, leading to Alex sacrificing his own life. Sam is desperately trying to bring down the Estrada empire while making sure to keep Emilia safe. Both Sam and Alex have done whatever is necessary for the young woman they both fell in love with, but who between the two truly held ownership over Emilia's heart? Could it be the man who chose her over his father but gave up his own life on her behalf? Maybe it's the man who would put her happiness before his own? In the end, the lies will have to come to light, and the absolute truth may finally set everyone free.

These were two books that were written well, with a strong story arc that transitioned seamlessly from one to the other. I confess that I was more on Team Sam than I was Team Alex, but who was I to fault either one for how much they cared for Emilia? I did figure out the twists in both books before they were revealed, but I was still able to enjoy the series. That epilogue in the second book was heartrending, and you'll see why once you read both books. Suffice it to say that it did make me wish for a third book...and it looks like that wish is going to be coming true. And now I can't help but wonder if what I just said will make you figure out what happened, but go ahead and read the books anyway. I hope you enjoy it as much as I did. Both Broken by Lies and Bound by Lies get four stars apiece. ♥