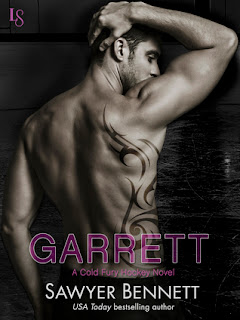 Garrett Samuelson loves hockey and the benefits that come with it, including being with puck bunnies, although he'd never be caught dead sleeping with them more than once. He's one of the best in the business but he also knows how to let loose and simply have fun. Settling down with one woman isn't something he's even considering at the moment, but when he meets Olivia Case, he can tell that she's not like the girls he's been with before. Her initial rejection merely spurs him into action and he's willing to chase her with everything he's got. When she eventually gives in, she does so hoping being with Garrett will distract her from the inevitable: she has cancer. She doesn't expect anything more from the hockey star than a good time, but when Garrett learns the truth, Olivia may be surprised to see what he's made of.

Garrett is the second book in the Cold Fury Hockey series from author Sawyer Bennett and shines the spotlight on Garrett Samuelson and Olivia Case, best friend of Alex Crossman and cousin to Sutton Price, respectively, from the first book. Even with the heavy theme of cancer and having one of the main characters diagnosed with it, the book still has its lighthearted moments. Garrett was memorable in book one and while he may constantly be tagged as a manwhore, the guy is way more than merely being someone who just happened to sleep with a lot of women in the past. I liked Olivia in the beginning but found myself becoming increasingly disillusioned by her attitude. Yes, I get it. She has cancer, but that diagnosis doesn't make her a victim nor does it give a patient permission to behave as selfishly as she did.

I've liked Garrett since the first book, but there were times that I felt that being with Olivia actually brought out a side of him that I didn't quite approve of. He would get angry and surly, and this from a guy who always had a ready smile and cool attitude. There was also an abruptness between chapters twenty-nine and thirty and the epilogue left me feeling a bit conflicted. But I did like that the book reminds readers that one can continue having a life in spite of a cancer diagnosis and that help and support from others may not have to be asked for but it should certainly be appreciated, at the very least. There's an incident involving Garrett's teammate, Zack Grantham, and his girlfriend, Gina Toast. It was heartbreaking and a definite turning point in the story and series. I'm giving Garrett four out of five stars. ♥