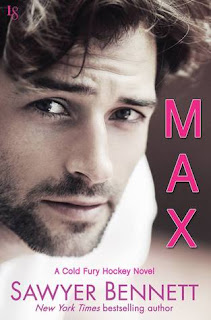 “Max . . . I simply can’t help but to love you too. You’ve made it impossible for me to have anything less than love. I don’t know what I did to deserve it but I’ll be damned if I’m going to ever waste it or take it for granted. I just want to make you as happy as you make me.”

Max Fournier may be the most eligible bachelor in professional hockey but he would much rather be the starting goalie for his team, Stanley Cup defending champions Carolina Cold Fury. At twenty-seven, he's one of the very best goalies around and with the former starting goalie now retired, Max has his chance. He loves being a hockey player, but while he's had his share of puck bunnies, drunken hook-ups, and short-term relationships, he's still a romantic at heart and believes in commitment. The last place he expects to find the woman who snags his heart is the convenience store at a gas station, but that's exactly where he meets twenty-five-year-old Julianne Bradley. She's naturally gorgeous and has no clue who he is, which is far more appealing than someone clinging to him and his celebrity. But Jules has a lot going on in her life, with three children under her care. Convincing her to live a little may prove to be difficult, what more convincing her to take a few risks--like spending time with him--and live life a whole lot more? Max is used to winning and with a main goal in mind--to win Jules' heart--he's already all in.

When her older sister passed away from cancer, Jules Bradley took in her nephews and niece, all below the age of ten. She became their legal guardian and sole provider, which required her to take another job aside from the current full-time job she already had. Life is by no means easy, but in the four months she's had the kids, she's prepared to scrimp, save, and sacrifice to give them what they need. She's got a lot going on and the last thing she needs is a relationship. Who would want to be with someone with as much baggage as her? But then she meets Max Fournier and from the moment he rescues her from two rude customers at the store and then bears witness to her struggles with the kids, she can't quite believe he would be interested. Max makes adjustments just to make sure that they're able to spend time together in between his games and her responsibilities. When other people start to see her as nothing more than a gold digger, Jules isn't sure if the hurt and hassle are worth it. There's no doubt they're already in love with each other, but is she prepared to be with him in spite of his fame and fortune?

Sawyer Bennett's Cold Fury Hockey series started off really well for me and most of the books that followed have gone over well with me, save for the fifth one, which faltered quite a bit, leaving me wanting. Well, talk about bouncing back because not only did I love Max, but I do believe I've found a new favorite (sorry, Alex!) in this sixth installment in this ongoing sports romance series. Calling this a Cinderella-like romance would be too simplistic. There were layers to the story and its complexities were ones I found rather enticing. I loved Jules and Max together, but I also loved them as individuals, with Jules and her dedication to her niece and nephews and with Max and his care and concern for Jules and the kids. Their relationship is by no means perfect. They work hard to make it work, compromising when necessary and learning to communicate better. It was nice having majority of the other couples make appearances here, but Stevie Magliano was such a fantastic multiple scene stealer, and I'm hoping he gets a happy ending as well! Max was a modern fairy tale that had me swooning. Five-plus stars. Le sigh. ♥