Review: Enemies of the State by Tal Bauer (The Executive Office #1) 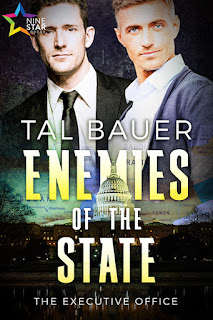 
Just when I'm trying to work my way through my year-end list of favorite reads, I find myself obsessed over a book that demands it take its rightful place on that very list. I'm talking about Enemies of the State, the first novel in The Executive Office, a romantic suspense thriller series from Tal Bauer, and my very first foray into the author's writing, which has me all smitten at the moment, especially since I quickly followed this series starter with the holiday book and third release, Interlude: First Noel, but I'll save my gushing and fangirling for that title in the review that follows this one. I would have jumped straight into the second full-length novel and second release, Enemy of My Enemy, but life got in the way (Don't you hate it when that happens?). I will, however, be reading it over the Christmas weekend to see if all three Executive Office stories land on my list of 2016 favorites. I'd be surprised if they didn't.

Enemies of the State is about the newly elected President of the United States, Jack Spiers, a forty-five-year-old widower and former practicing lawyer, congressman, and senator, and Ethan Reichenbach, the forty-one-year-old head of the POTUS's security detail, a Secret Service agent for twelve years, and a ten-year military veteran. A Secret Service agent is never supposed to engage with their protectee on a personal level. But being in close proximity to one another and Jack's desire to have a friend--a trusted confidant--mixed in with Ethan's own growing attraction to the most powerful man in the world have them blurring the lines. Ethan has always been openly gay, and Jack has always been straight. So could this simply be a case of Jack suddenly wanting intimacy and affection, something he hasn't indulged since his wife died fifteen years ago or could this be unexpectedly more?

But even with the confusion and uncertainty swirling around Ethan and Jack and what really is going on between them, both men have their respective responsibilities to uphold. There's a terrorist movement led by the Islamic Calaphite and spreading across the globe. However, there's a great deal more happening behind the scenes. A rogue Black Ops unit called Black Fox is ready for the culmination of years of planning and plotting, and while several key figures in that very group are given names early on and throughout the book, the tense air of mystery and apprehension remains because of one integral player who no one sees coming...until it's too late. Will Jack be able to gather the right intelligence and allies in order to fight a looming war? Can Ethan protect the leader of the free world--the man he loves--or have his feelings compromised his ability to do his job and put everyone at risk?

Gah! Tal Bauer's writing is just...amazing, and that word doesn't fully encompass how damn addictive her storytelling is. And seriously, I'm afraid calling it "storytelling" won't give you any idea of how she's able to weave such an intriguing tale of espionage and deceit and effortlessly combine it with a love story between two men that should not be but, thankfully, does happen. What happens to and between Ethan and Jack develops over time, but the story is never dragged down by needless details and oversharing. Readers get the essentials along with bits and pieces of information about Black Fox. Resistance was futile because once I started reading this novel, there was no turning back. Hell, there was no putting my e-reader down. And while there is a resolution as far as their relationship is concerned, Ethan and Jack's--and the rest of the world's--troubles are far from over.  This was a superb start to a series that I hope doesn't end anytime soon. Five-plus stars times twenty for Enemies of the State. ♥