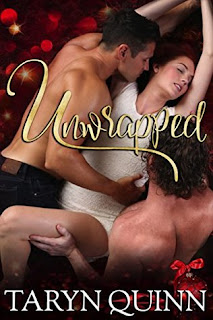 The writing duo of Cari Quinn and Taryn Elliott have gotten together again, but this time, they're using a combined pen name, Taryn Quinn. Their initial offering is Unwrapped, a story about three best friends who decide to take their friendship to the next level. This was originally published under Cari Quinn's name four or so years ago, but I never came across that first version, so I can't compare the two and pinpoint what parts have been changed, if any.

Caitlyn Sachs wants to punch in her V-card and she wants one of her best friends to help her do it. Matthew Collins and Tristan Baldwin aren't just her best friends; they're her business partners as well, and they share everything each other. Then Caitlyn discovers a secret Matt and Tristan have been keeping from her for over a year, one that proves to be the very thing that all three of them need to nudge them towards the unexpected but much desired.

When it comes to triads, there's always this part of me that isn't quite convinced that the feelings that all three members of said triad are on equal footing. It's rare when I'm actually swayed to believe the three partners involved in a relationship like this (not just a fling or a one-time thing) love or care about each other with the same intensity. In the case of Unwrapped, I wasn't moved towards changing my original stance on triads because I felt Cait and Matt loved Tris more than they did each other. That doesn't mean, however, that I didn't enjoy the story; I did. There was enough about this book that allowed it to be different from other threesome love stories and I've always enjoyed the combined writing efforts of Cari Quinn and Taryn Elliott, as I've enjoyed their writing as individuals. I look forward to seeing what Taryn Quinn have in store for readers next. Four stars go to Unwrapped. ♥