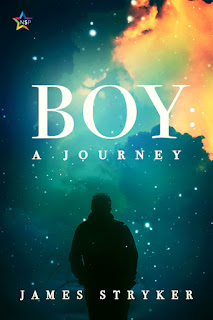 Everyone felt alone. And the reverse was also true. Everyone also felt like the world revolved around them sometimes.

But neither place is a good home. Neither is a true home. You have to battle to the middle ground. To be happy with yourself, but striving for better.

Boy: A Journey truly is the story of one young man's journey to discovering the story of the man behind the moniker of "Dad" and, in the process, learning a two or thing about himself and what family is all about. This is my first James Stryker read and color me impressed because this was a novel that wasn't just worth reading but one that gives you pause, making you contemplate what you would do if you were, not just in the shoes of the main character but in those of other characters in the story. I didn't fall in love with Luke; as a matter of fact, he ticked the heck out of me in the beginning. But as I experienced his journey alongside him, the boy evolved into the man his father always believed he was meant to be, and it was then that I knew that he was going to be alright after all.

It takes losing his father in an accident in a parking lot that he feels guilt over for Luke to later realize that he didn't really know this man who was a part of his life for twenty-six years. When a man named Tom comes to pay his last respects to Jay and his bereaved family, all it takes is one comment to tilt Luke's world and from there, it falls of its axis. One secret that was kept from him, a secret that he later discovers is known by his mother and the twin sister he believed was his only ally. Even the brother-in-law whom he thought was trying to usurp Luke's position in the family knew. Luke is filled with an odd combination of rage and remorse. He wants answers and there's only one person who can give them to him now that his father is gone. But will he survive the answers Tom could give him?

I already had my top reads for 2016 more or less locked down and then I read a couple of books that demanded they be added to the list, so I'm in the process of reworking said list. Yes, Boy: A Journey happens to be one of those books. James Stryker's writing is enthralling, pulling you in without you consciously realizing it and making you eager to see the entire thing through, with the same amount of enthusiasm throughout. His characters are all too human, which is why there were qualities about each one I could relate to. My heart broke for all those whom Jay loved and loved Jay in return, but more so for Luke and Tom. In a way, Luke made up for his shortcomings as a son with Tom. Read the book and you'll see why. Boy: A Journey is a highly recommended five-plus-starred marvel. ♥