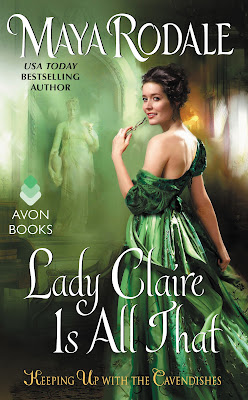 Lady Claire Is All That
(Keeping Up with the Cavendishes #3)
by Maya Rodale
Date Released: December 27, 2016
Avon Books

About Lady Claire Is All That
Her Brains . . .

Claire Cavendish is in search of a duke, but not for the usual reasons. The man she seeks is a mathematician; the man she unwittingly finds is Lord Fox: dynamic, athletic, and as bored by the equations Claire adores as she is by the social whirl upon which he thrives. As attractive as Fox is, he’s of no use to Claire . . . or is he?

Fox’s male pride has been bruised ever since his fiancée jilted him. One way to recover: win a bet that he can transform Lady Claire, Society’s roughest diamond, into its most prized jewel. But Claire has other ideas—shockingly steamy ones . . .

By Claire’s calculations, Fox is the perfect man to satisfy her sensual curiosity. In Fox’s estimation, Claire is the perfect woman to prove his mastery of the ton. But the one thing neither of them counted on is love . . .

Read my four-starred review of Lady Claire Is All That.

Follow the Lady Claire Is All That blog tour.

Add Lady Claire Is All That on Goodreads.

Find the Keeping Up with the Cavendishes series on Goodreads.

An Excerpt from Lady Claire Is All That
“You’ve never been known for being the sharpest tool in the shed, Fox, but now I think you’re really cracked,” Mowbray said. “You cannot just give a girl a new dress and make her popular.”

“Well, Mowbray, maybe you couldn’t. But I could.”

“Gentlemen . . .” Rupert cut in. “I don’t care for the direction of this conversation.”

“You honestly think you can do it,” Mowbray said, awed.

He turned to face Mowbray and drew himself up to his full height, something he did when he wanted to be imposing. His Male Pride had been wounded and his competitive spirit—always used to winning—was spoiling for an opportunity to triumph.

“I know I can,” Fox said with the confidence of a man who won pretty much everything he put his mind to—as long as it involved sport, or women. Arabella had been his first, his only, loss. A fluke, surely.

“Well, that calls for a wager,” Mowbray said.

“This is a terrible idea,” Rupert said. He was probably right, but he was definitely ignored.

“Let me see . . . who shall I pick?” Mowbray made a dramatic show of looking around the ballroom at all the ladies nearby. There were at least a dozen of varying degrees of pretty and pretty hopeless.

Then Mowbray’s attentions fixed on one particular woman. Fox followed his gaze, and when he saw who his friend had in mind, his stomach dropped.

“Yes,” Mowbray said, a cocky grin stretching across his features.

“Unfortunately dressed I can handle. Shy, stuttering English miss who at least knows the rules of society? Sure. But one of the Americans?”

Fox let the question hang there. The Cavendish family had A Reputation the minute the news broke that the new Duke of Durham was none other than a lowly horse trainer from the former colonies. He and his sisters were scandalous before they even set foot in London. Since their debut in society, they hadn’t exactly managed to win over the haute ton, either, to put it politely.

But Fox was still in shock and Mowbray was enjoying it too much to pay any mind to Rupert’s defense of the Americans.

That was the thing: Mowbray hadn’t picked just any American, but the one who already had a reputation for being insufferably intelligent, without style or charm to make herself more appealing to the gentlemen of the ton. She was known to bore a gentleman to tears by discussing not the weather, or hair ribbons, or gossip of mutual acquaintances, but math.

Lady Claire Cavendish seemed destined to be a hopeless spinster and social pariah.

Even the legendary Duchess of Durham, aunt to the new duke and his sisters, hadn’t yet been able to successfully launch them into society and she’d already had weeks to prepare them! It seemed insane that Fox should succeed where the duchess failed.

But Fox and his Male Pride had never, not once, backed away from a challenge, especially not when the stakes had never been higher. He knew two truths about himself: he won at women and he won at sport.

He was a winner.

And he was not in the mood for soul searching or crafting a new identity when the old one suited him quite well. Given this nonsense with Arabella, he had to redeem himself in the eyes of the ton, not to mention his own. It was an impossible task, but one that Fox would simply have to win.

“Her family is hosting a ball in a fortnight,” Mowbray said. “I expect you to be there—with Lady Claire on your arm as the most desirable and popular woman in London.”

Maya Rodale began reading romance novels in college at her mother’s insistence and it wasn’t long before she was writing her own. Maya is now the author of multiple Regency historical romances. She lives in New York City with her darling dog and a rogue of her own.