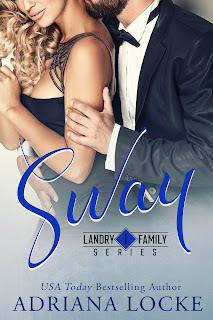 "What if you decide you hate me?"

He laughs, kissing me on the nose. "What if you decide you're going to love me forever? Because that, Ms. Baker, is what I'm going to make sure happens."


Penned by Adriana Locke, the Landry Family series is about a family in Savannah, Georgia composed of parents Harris and Vivian and their six children, sons Barrett, Graham, Ford, and Lincoln and twin daughters Sienna and Camilla. The contemporary romance series kicks off with Sway, which also happens to be my first ever read from the author, the story of the eldest among the siblings, Barrett, currently the mayor of Savannah and running for the governorship of the state of Georgia. This was a sexy read, one with heart and humor, and an easy favorite for me.

Following in the political footsteps of his grandfather and his father, Barrett Landry was groomed to be in politics. He's ambitious and he knows that in order to get ahead, he has to play the political game. His reputation as a ladies' man is well-known and there's never been a woman that's made him want to settle down...until he locks eyes with a gorgeous member of the wait staff at a campaign sortie. Barrett's never had to pursue a woman in his entire life, but there's nothing usual about Alison Baker. She makes him want more and to be a better man for her.

Ever since the nightmarish end of her marriage, Alison Baker's life has solely been about raising her son Huxley. She's had enough of being in the public eye, no thanks to her ex-husband, so as much as she's attracted to Mayor Barrett Landry, she can't afford to fall for him or to risk having Huxley be a target for the press that's always on the lookout for anything related to the leading candidate for governor. However, Barrett is nothing like her ex-husband and both are falling hard. Is Alison willing to take a chance on a man whose life is always in the spotlight she hates?

This was my first time reading an Adriana Locke novel and now I get why she's gotten the rave reviews that are on e-retailers, blogs, and Goodreads. We get glimpses into the Landry family as a whole throughout the book, enough to guarantee that we're so curious about the rest of the siblings that we'll be waiting anxiously for each new release in the series. Even the parents piqued my interest, especially with how balanced Harris and Vivian Landry's marriage seems to be, but the six siblings are as distinct as they are similar in their strong ties to their loving family.

The spotlight, however, truly belonged to the couple of the moment: Barrett and Alison. They both transform as main characters and their journey isn't easy, especially since a lot of it plays out in the ever invasive public eye. They take steps forward but also have lapses that have them stepping back. And yet you can't help but stick it out with them, cheering them on because their lives to become fuller when they're together. There were scene stealers--Huxley and Lincoln--but Sway really was a five-plus-starred read because of a strong cast and sweet story. ♥