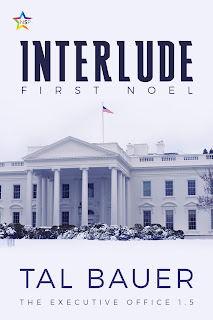 A zing went through Ethan's body, singeing his bones. Jack's open desire of him--his body, his unbridled masculinity--made his world spin dizzily. There was no way anyone could ever accuse Ethan of being feminine, and Jack's embrace of that--of who Ethan was--made him feel desired like nothing else ever had. Jack wanted him. All of him.

Let the fangirling commence! If the first novel in Tal Bauer's The Executive Office hooked me, this holiday novella (though it's much longer than the usual novella but shorter than the full-length novels that were released prior to it) reeled me in and I went willingly. I pledge allegiance to all things Secret Service Special Agent Ethan Reichenbach and United States President Jack Spiers and all the romantic suspense thrills and chills that Tal Bauer intends to throw my way. While Interlude: First Noel still has those elements found in the series starter, Enemies of the State, this latest release in the series has a lighter feel to it and if I seriously wasn't in love with these two men after everything they went through in book one, this right here clinched it. This novella takes place after Ethan is re-assigned to Des Moines, Iowa but before he decides to return to Washington, DC, both of which happen in EotS.

The last thing Ethan Reichenbach ever expected was to lose his position as head of the presidential security detail within the first year of Jack Spiers's presidency. But then he never thought he'd end up falling in love with the most powerful man in the country--and in the world--and having that love reciprocated. So he accepts the transfer to Iowa to handle financial crimes and makes do with Skype conversations with Jack and heading back to DC for weekend visits with his man. When the case he's investigating turns into more than counterfeit money, Ethan is unsure if he can live with his boss's mandate that he not become actively involved, not with his being the president's boyfriend. Things aren't all that easy on Jack's end either. He misses Ethan and he's immersed in negotiating for votes to sanction going to war. With so much instability going on, can their relationship evolve into the one stable thing that they can hold on to or will something have to give with everything brewing around them?

I liked that this delved more into the intricacies involving Ethan and Jack's long distance relationship after what happened with Black Fox. There was a lot going on in the first book, but here, most of the focus is really on Ethan and Jack and their trying to make the necessary adjustments and take whatever steps in order to make their relationship work. Yet, the suspense part doesn't wane either. Ethan's case in Iowa is intriguing as is how he's treated by the other Secret Service agents and his immediate superior. His working relationship with his partner, Blake Becker, was one of my favorite things about the book because the change in his opinion of Ethan is representative of others in the story who do not know all the facts and base their reactions on innuendos and gossip. As always, I loved seeing the other Secret Service guys, especially how supportive they are of Jack and Ethan. The exchanging of gifts during Christmas and their conversation with Jack's parents both brought such a smile to my face. Two books in and I'm thinking Tal Bauer can do no wrong. Five-plus stars for Interlude: First Noel. ♥

Enemies of the State (book one) - five-plus stars - My Review