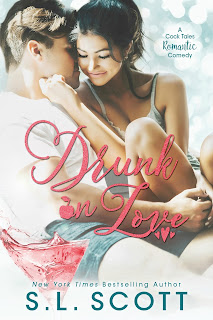 Drunk on Love is the first novel in bestselling author S.L. Scott's brand new series, Cock Tales, and it's about bar owner Hardy Richard and financial analyst Virginia Ryan. One's looking for love; the other, not so much. Hardy Richard has never wanted for female attention and he seriously doesn't make apologies for being honest when it comes to knowing what he wants (sex) and what he doesn't want (a relationship). But when Virginia Ryan shows up at Hardy's Hideaway, Hardy finds himself face to face with a woman he actually wants to get to know beyond sex. But Virginia's there for more than a cocktail or two. She's got her heart set on one man...and it happens to NOT be Hardy. She does, however, need his help in the art of seduction, something that she's heard Hardy is the leading expert on around the five boroughs. Hardy doesn't like the idea of this woman who's fascinated him to end up in the arms--and bed--of another man, especially one he doesn't think deserves someone like her, but if it means getting to spend time with Virginia, he's in. He told himself he'd never fall in love. Now, it looks like he's on his way to doing exactly what he said he wouldn't do...with the one woman that wants to be with someone else...

This series starter was such a witty romance read, one that I enjoyed from start to finish. I liked how Hardy and Virginia were so different from how I expected them to be by the time I was done with the first chapter, which made for a far more interesting story. The banter between the two felt natural and made Hardy and Virginia an endearing couple to get to know. I will say, however, that it never really made much sense to me as to why Virginia had her heart set on the guy that she was interested in. She knew his reputation at work and yet she still wanted him. I don't know if she honestly believed she was going to be the one to tame him, but hello, for an intelligent woman, she was blinded by her crush (and let's face it, that's really all it was because I highly doubt she was ever really feeling any sort of love for the jerk). Hardy, on the other hand, was the kind of guy who embodied the whole "what you see is what you get" mantra. He was who he was, whether as a man who indulged in women--yet maintained certain standards--or a man who was falling in love with just one woman. I hope the other bartenders in Hardy's Hideaway get their stories told as the series goes on as well. Drunk on Love receives five out of five stars. ♥

Purchase Drunk on Love on Amazon.