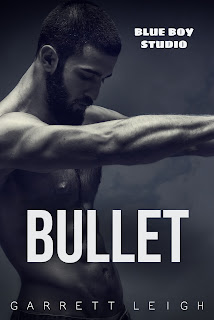 I love that I'm discovering Garrett Leigh's older releases now that they're being re-released through new publishers. The latest one is Bullet, the first in her Blue Boy books, a series that chronicles the models in Blue Boy Studio, a production company in the gay pornographic industry. Unlike other studios, Blue Boy models aren't gay-for-pay, and book one introduces us to one of the most popular stars in their stable: twenty-seven-year-old Levi Ramone. He's known for being one of the most in-demand tops around, and he prefers it that way. He goes in, does his job, and gets paid for it. However, his producer proposes a change, something that Levi is more than apprehensive about. He's never bottomed, whether on-screen or in real life, and he's never intended to change that. But with the money that's being offered, he'd be a fool to say no, even if it means being part of a threesome where he's going to lose his bottom cherry to a Blue Boy top bigger than him in more ways than one. To make things worse, the third member of the proposed triumvirate is someone he hates and who hates him right back...

Sonny Valentine may be a dancer for Silver but his limberness proves to be something worth watching when he's in front of the cameras for Blue Boy. He's eagerly awaiting Levi Ramone to sign off on the threesome scene, not because he has a thing for the guy, but because he knows exactly what awaits Levi and he wants nothing more than for Levi to experience what he makes many a bottom on-screen feel. He's never liked Levi and it's a very mutual feeling. But then Levi surprises him, leading Sonny to believe that he had the top pegged all wrong or at least to some degree. He offers to help Levi prepare for the scene, both physically and otherwise, but there's more going on with Levi than just the anxiety of being bottomed for the first time. The bits and pieces he gets makes him know Levi a tad better, and soon, it's more than clear that the attraction between them is difficult to ignore. But could Sonny really be the guy that doesn't just rescue Levi from the stress of filming a scene he'd rather not do but also from everything in his personal life that's now crashing down around, even with Sonny having his own issues?

Sonny and Levi were a study in contradictions, but I have a thing for opposites falling for each other, so these two floated my boat quite nicely. Just like Levi, there's more to Sonny than meets the eye. This felt more like Levi's story than Sonny's so I would have wanted a bit more of his own back story as well, but I have heard from a friend who read the three books in the series when they were originally released between two and a half and three years ago that Levi and Sonny's story does extend past the first one, although more in snippets and glimpses in the two latter books, but enough that you get that they've got stuff to sort out--with Sonny as an individual and both of them as a couple. Among the supporting characters, Cam Shaw was the one I'm most curious about, especially since it's hinted that there could be something going on between him and Blue Boy boss Jon Kellar. Bullet was the ideal series starter, giving readers a story for us to sink our teeth into and for more characters for us to want to get to know as Blue Boy moves forward. I, for one, can't wait to read even more from this fab series. Bullet gets five stars. ♥