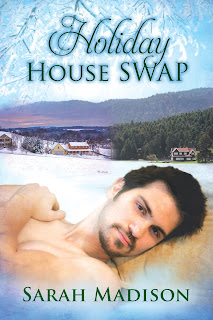 Holiday House Swap is my first Sarah Madison read and it's an M/M holiday standalone romance published by Dreamspinner Press. It's the story of Noah Kinley, an author who's written a successful romantic suspense series but uses the name of his female friend as his nom de plume, being told by an agent that no one would ever want to read the books with a heroine if it were written by a man. The novels have gone on to become bestsellers and Noah knows that he's going to have to come clean sooner rather than later, but he also wants to ensure that he can pitch a new book series--one that he can write under his own name--so that he'll have something to fall back on. Unfortunately, he's still got one more book in the current series he needs to finish and with his writer's block getting the best of him, Noah's decided to participate in a house swap for the holidays for some change of scenery.

Air Force Major Connor Harrison is back home after being discharged. Now that he's no longer on active duty, he knows it's time to make some important decisions about the property his late father left him, a property that's rather expensive to maintain. But all that has to wait when Connor discovers that someone's in his house--a man lounging in the bathtub reading from a Kindle. After a bit of awkwardness, Connor learns his brother and sister-in-law swapped houses with Noah Kinley, failing to mention to Noah that the house actually belongs to Connor and not informing Connor about the swap at all. Agreeing to stay in the same house over the next three weeks, the two men get to know each other while pretending the attraction they feel isn't something they should act on. With limited time, secrets kept, and Noah in Connor's business, a lot's still up in the air...but could love be one of them?

Holiday House Swap was certainly a refreshing read amidst the usual heartrending and touching holiday stories that I've read and I'm still planning on reading. Both Noah and Connor have lots going on in their lives, especially since they're at their own respective crossroads, unsure of where they're headed next as individuals. And maybe that's why they were meant to meet: their roads intersected at just the right time, but it wasn't something that came easily, with both having to deal with their issues and needing to decide if what was going on between them was nothing more than a holiday fling or if it was something far more meaningful. I loved how detailed those moments that involved horses were, making it obvious just how adept the author is with all things equine. Overall, I liked that this was different and was a balance between humor and drama. Four stars go to Holiday House Swap. ♥