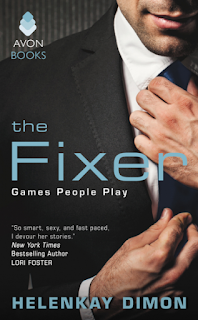 The Fixer is the opening salvo in author HelenKay Dimon's brand new romantic suspense series, Games People Play. Thirteen years may have already passed, but twenty-five-year-old Emery Finn is still searching for her missing cousin, who was more like a sister and the person closest to her. Emery is desperately trying to find a mysterious, almost mythical, individual named Wren, whose name appears in her late father's files. When they do meet, Wren proves to be quite an enigma. She may have initially wondered if he played a role in her cousin's disappearance, but soon enough, Emery realizes the man knows as "The Fixer" could be the one to help her find closure in her cousin's case. Now, if only she can resist the undeniable pull she has for the man very few people know personally.

While I confess that I already figured out who was behind the disappearance of Emery's cousin as soon as that person was mentioned for the first time in the story, my curiosity was more about Wren and how different he was around Emery. The limited number of people who knew him knew about his not being forthcoming when it comes to personal details about himself, and yet here was this woman who enticed him to reveal more than he's ever revealed to someone in such a short period of time. There was an unspoken kinship between the two of them, and maybe Wren had always had a desire to intimately be himself with one person who wasn't a colleague or a friend.

I loved Wren. His evolution as a hero had me transfixed from the beginning, and he was the biggest reason why I liked this series starter. He may have come off as stiff and formal during the first few times he's with Emery, but don't doubt that there's more to the man. His story was the kind you could sink your proverbial teeth into, and everyone else's was second best. There were times that I didn't think Emery was good enough for him--mainly because she got on my nerves more than once--but in the end, she gave him a reason to come out of the shadows he always preferred to blend into. The Fixer was a four-starred start to a series I look forward to reading more of. ♥