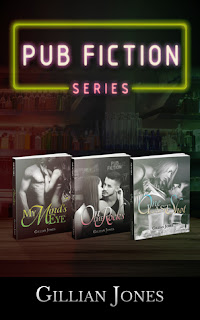 Note: This ARC was provided by the author via Between the Sheets Promotions in exchange for an honest review.

After reading Call Me a couple of months ago, Gillian Jones immediately went on my radar of authors to watch out for. So, when the opportunity to read and review the boxed set for her Pub Fiction series came along, I jumped right on it, and thank goodness I did. These three stories--My Mind's Eye, On the Rocks, and One Last Shot--were tied together by the backdrop--a bar called Pub Fiction--and a recurring cast of characters, but each one was distinct and had me sighing in happy satisfaction with every happily-ever-after the couples journeyed towards. They can be read as standalones, but I'm the kind of reader that prefers to read all the books in a series and in order--whether through release date or an author-recommended reading order--so I'm going to suggest you do the same. The best thing with the Pub Fiction Boxed Set is that you get three books for 99 cents if you snag the set during this merry month of December. If you've never read anything by Gillian Jones, give this one a fair shot. Will my rating of five-plus stars convince you? Keep reading the review because I'll talk about each of the books as well.

My Mind's Eye is the story Kathleen Rollins and Ryker Eddison. As she's about to start her final year in university, Kat is hired as the new shooter girl at Pub Fiction. There she meets Ryker, who either growls at her or is unable to form words and sentences to speak to her. The guy, however, happens to be the most good-looking male she's ever come across, and his reputation as a manwhore proves that he knows what kind of effect he has on females. He's used to being fawned over, but Kat's different. Is Ryker ready to chase after a woman who could be his Holy Grail?

This was a slow burn romance, with Kat being a game changer for Ryker. I liked these two together, and found the whole impasse between them in the beginning as foreplay of sorts. Not only was this a great love story with its own twist, but it was also a fantastic series starter, introducing readers to other characters, quite a few of whom had the potential to get their own shot at a happy ending as the series progresses. Both Kat and Ryker grow and evolve as their story plays out, and Hot One and Honeybutter were a hoot to read about. Book one gets five stars.

“I’m the knight meant to take care of you—and to love you and Emmerson. Me. Shawn brought you to me. He’s giving us to each other,” he whispers in my ear. “I’m gonna be your happily ever after.”

On the Rocks is about Braunwyn Daniels and Levi Eddison. Pub Fiction is the one girl in Levi's life and he has no plans of changing that status anytime soon. Then Braun Daniels walks through the front door of the bar for a job and Levi's life is changed forever. But it was more than four years ago when Braun's world was knocked off its axis, leading to her losing the boy she loved and the father of her unborn child. As much as Levi stirs within her feelings she hasn't experienced for years, can this man really be the unexpected knight promised to her and her daughter?

Gah! I loved this second book! Braun's story started out with a tragedy, but talk about her shared story with Levi ending in triumph! There's one particular scene involving Braun letting Levi read Shawn Parker's suicide note that had me teary-eyed because it served as such a turning point for their relationship. The whole Scrappy-Scooby-Shaggy thing was totally adorable because I do love me my old cartoons and Scooby-Doo is a personal favorite. Even before it ended, I was going to give book two five-plus stars already, but that epilogue absolutely clinched it.

“Why not love me like you're losing me, but instead, keep me, and let me keep you in return? Why not believe that we can be happy, build our lives together? I get it. I get that your parents died, and that it affected you. But why the hell are you punishing me for it? I'm here. I want you. So fucking much.”

One Last Shot gives us the tale of Claire Knox and Matt Bishop. This second chance love story takes place two years after the events in the first book. Claire ended her relationship with Matt by leaving without a word of goodbye or an explanation. Two years later, she's back for her best friend's wedding, the same wedding where Matt is the best man. Falling in love with Matt a couple of years ago was something she never planned for. Now, she claims she only wants to be friends again, but Matt wants more. How long can Claire resist the one guy she never stopped loving?

Oh my. If I asked Santa for my very own Matty, do you think he'd sign off on it? The guy owned my heart from the moment he locked eyes with his Sugarshack after not seeing her for two years. He was never a jerk, even though she broke his heart when she left. The emails in the draft folder was such a le sigh moment for me and then the part where he lays it all out during Kat and Ryker's wedding reception brought me to tears. Five-plus stars. I love this series and a peek at Goodreads has me all giddy because it looks like there's more Pub Fiction on the horizon.