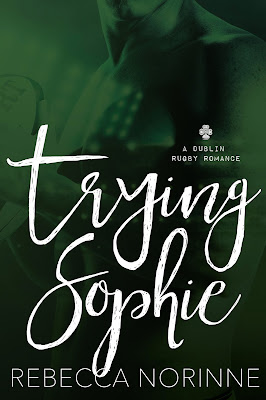 Sophie loves her life: she's travelled the world and lived by her own rules. But when she finds out about her grandfather's heart attack, she drops everything and boards a plane to Ireland. Two weeks, that's the plan. Until one look at her childhood nemesis has her rethinking everything. She's sworn off athletes, but she might just give him a try...

He's the biggest player of all.

Sex and rugby. Those were the only two things Declan cared about, right up until his first love waltzed back into his life. Even as he slept his way through Dublin, he never stopped thinking about her. Never stopped wondering if she thought about him, too. So even though he's never gone after a woman the way he chases down opponents on the field, this time, he won't let her get away.

On the field, he's invincible, but she just might break him. 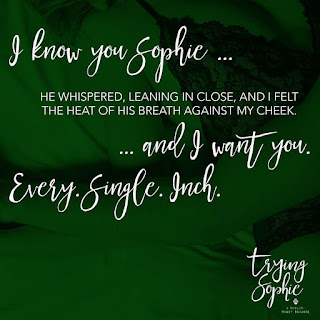 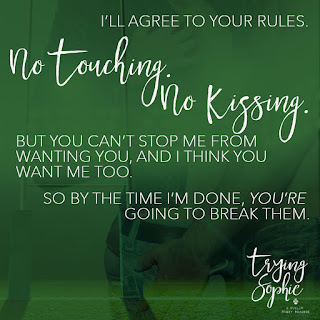 An Excerpt from Trying Sophie
Sophie might try to fight what was building between us, but she couldn’t hide her feelings from me. Her body gave her away. It was there in the dilation of her pupils, the quick intakes of breath, the strong, heavy beat of her pulse in her neck.

But there was something else there too, and it tugged at my conscience. Fear resting heavy and unspoken between us. Why though? She had to know I would never hurt her. Not consciously. But what if it wasn’t about me? What if her reaction was because of something, or someone, in her past?

My gut churned and I felt a fiery ache in my chest, a desire to maim or kill whoever had put that fear in her. “Did someone hurt you?”

The words were barely audible, but I knew she’d heard them when her eyes flashed with surprise. She gasped and she shook her head. Gripping my arm tight, she rushed to set my mind at ease.

I sagged in relief, the air rushing from my lungs in a heavy gust.

Sophie turned and paced. When she returned, she asked, “Why would you think that? That someone hurt me?”

“If you could see what I see right now, you’d know why. You’re terrified. Of this.” I gestured between us “Of me?”

I paused a beat, giving her the chance to correct me, but she didn’t.

I was begging her to let me in and a small part of me was disgusted at sounding so weak and needy. But I was weak. Needy for her in a way I’d never been for anyone else. I was consumed by her.

“Declan, I …” She stopped and marched back to the bench we’d occupied earlier. “Come sit with me,” she said, gesturing to the space next to her.

When I joined her, she twisted her hands together nervously. Speaking down to them, she said, “I’ve heard the stories, you know. You’re promiscuous and I’m … well, I’m not. I’m a one-man kind of woman and I expect the same of anyone I’m with. I’m afraid you can’t give me that.”

I started to say I could be the type of man she needed if she’d just give me a chance, but the words wouldn’t come. The truth was, I wanted to be that guy, but I didn’t know how. I didn’t know if I was capable of it.

“I’m not used to being so open, so vulnerable with … well, with anyone really, and it has me unsettled. But the most frightening thing of all is, I think I feel something for you. I didn’t want that to happen.”

I knew she was just being honest, but her words cut me to the quick. From the moment I’d laid eyes on her, that’s all I’d wanted. The truth was, I’d wanted this girl my whole life. So yeah, I hoped she’d feel the same … eventually. And now that she was getting there, hearing her tell me how it was the last thing she’d intended felt like a punch to the gut.

She stared at her hands again, and her long, blonde hair fell around her face, hiding her expression. I wanted to lift her chin so I could see her eyes when she spoke, but I stopped myself. If anyone could understand needing to shield oneself from that sort of intimacy, it was me.

“I didn’t want to feel anything for you … or anyone for that matter. I didn’t need this sort of complication in my life.” She lifted her head and a sad smile tugged at her lips. “I don’t even know you, not really. And what I do know tells me I should stay far, far away. But this thing between us? It’s potent. And it terrifies me because I don’t know how to deal with it.”

There were a couple of ways I could play this. The easiest would be to flirt and charm my way past her resolve, make her feel good about her desire … and then just make her feel good, period. But I’d promised her grandfather I wanted more from Sophie than just sex. I knew we had no real future to speak of, but we could have a wonderful now. I had to be okay with that.

I slid my hand along the back of the bench to touch her, something I wanted to do so badly, but instinct told me not to. “The truth is, Sophie, I’ve been half in love with you since I was eight years old.” 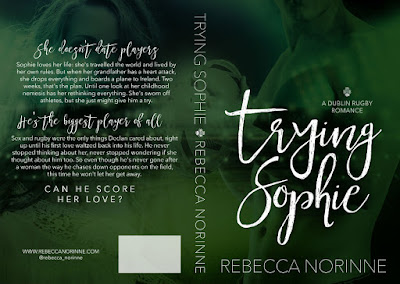 Rebecca read her first book when she was four years old and has been hooked on the written word ever since. While working in technology PR in Silicon Valley, she began writing her debut novel and eventually published it six years later. At the end of 2014, she left behind her career in corporate communications to become a full time author. When she's not writing, you can find Rebecca exploring her new city of Dublin, Ireland, watching Leinster Rugby matches, or traveling the globe searching for inspiration for her next book. 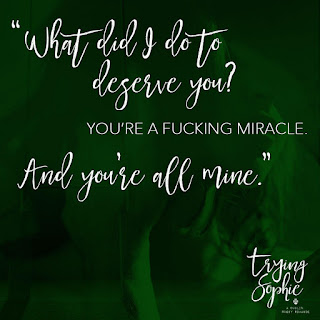