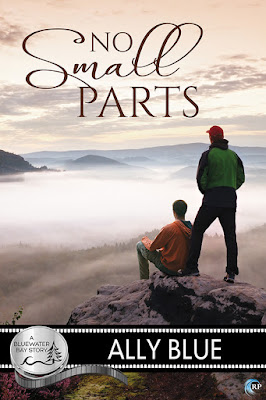 About No Small Parts
Nat Horn is almost living the dream. His part as a werewolf extra on the hit show Wolf’s Landing has somehow turned into a regular role. Beautiful rising star Solari Praveen has taken an interest in him. He’s even making enough money to think about getting out of Bluewater Bay someday. Except his retired dad’s dependence on pain medications seems to be getting worse, and Nat’s the only one around to take care of him.

When Nat learns that Solari’s interest isn’t romantic, his disappointment is surprisingly short-lived, because in getting to know her, he also got to know her assistant, Rafael. And Rafael turns out to be the kind of friend—and potential boyfriend—Nat never dared to dream about.

Distracted by his astonishing new life, new friends, and new possibilities, Nat lets his guard down, and suddenly his life goes careening out of control. Racked by guilt, he tries to push his new friends away, but the bonds he’s formed are already too strong. In fact, they’re strong enough to pull him forward, into the future he’s been longing for—but to get there, he’ll have to let go of the past.

Read my five-plus-starred review of No Small Parts.

Add No Small Parts on Goodreads.

An Excerpt from No Small Parts
Not ten feet away, the tall, slender blond man who’d been blatantly staring at Solari’s trailer turned away and pretended to check his phone.

Rafael studied the other man’s long legs and graceful back with interest. He knew exactly two things about this person: he played one of the recurrent nonspeaking werewolves on the show, and he’d been drooling at Solari’s feet practically ever since she’d arrived on set.

Well. He also knew the guy was a low-key sort of sexy. And the way his stare turned intense once he got his wolf makeup on . . . Did he even know he did that?

He was made for film. The camera loved him. The director in Rafael wanted to know more about this man with such a wealth of raw talent.

Acting purely on impulse, Rafael strode over and planted himself directly in front of Sexy Werewolf. “Hi. We’ve seen each other around set, but we haven’t been formally introduced.” He stuck out his hand and put on his biggest, brightest smile. “I’m Rafael Cortez, Ms. Praveen’s personal assistant. Pleased to meet you.”

Blondie gaped at him. “Huh?”

“I’m Rafael.” He held his pose, hand out and smile in place, though he was starting to feel like an idiot. “What’s your name?”

After a couple of endless, painful seconds, Sexy Werewolf finally shook his hand. “Nat Horn. I play a werewolf on the show.” His voice was deep, slow, and soft, as if he were thinking through each word individually before he spoke. Rafael found it intriguing.

“Yeah, I’ve seen you act.” Rafael peered up into Nat’s eyes, a washed-out, almost white blue. Eyes like a husky. He’d always thought they were contacts. Apparently not. “You’re a natural.”

“Nothing but the truth.” A damp, chilly breeze flowed down the lane between trailers, and Rafael shivered. “I was about to go get some hot tea or something. You want to join me?”

Nat shrugged. “Why not? I have a few minutes before I need to be in the makeup chair.”

The two of them strolled toward craft services in companionable silence. Rafael zipped his jacket all the way to his chin and wondered how Nat managed not to freeze in his thin long-sleeved T-shirt. The morning was misty and cool, like most March mornings in coastal Washington, and Rafael couldn’t have survived without his fleece jacket. He’d been brought up in the southern California sunshine. This whole cold-and-damp business didn’t work for him.
“So,” Rafael said as they took their place in the coffee cart line. “Are you from here?”

“Yeah. Born and raised.” Nat cut him a knowing look. “I don’t need to ask about you.”

Rafael laughed. “You got me. I’m one of those Hollywood invaders.”

A crooked smile softened Nat’s sharp features. “This place never had it so good.”

It wasn’t the first time Rafael had heard that sentiment. Seemed the town had been breathing its last before Wolf’s Landing came along and revived it. Most of the locals loved the economic boost, if nothing else.

“It’s gorgeous here. I love it.” Which wasn’t a lie. Hollywood held Rafael’s heart, but the natural beauty of this place had knocked him sideways from the first. It still did. “And everyone’s been super nice.”

The sardonic arch of Nat’s right eyebrow said he knew that wasn’t completely true, but he didn’t argue. Then it was their turn to order and the subject was dropped in favor of hot beverages.

Nat got his Americano first, because this was Washington State and coffee was king, always fresh brewed and ready to go. He went to find them a seat while Rafael waited for the girl with the green buzz cut to make him his chai tea.

When he finally got his lusciously warm cup and turned to find Nat, he was startled to see Solari standing beside Nat at the edge of the crowd. Her hand was resting on his arm, her face was tilted up toward his with that smile that had the whole world under her spell.

If Rafael didn’t know better, he’d have said she was flirting.

Whether she was or not, poor Nat was clearly neck-deep in that deliciously torturous territory you fall into when your crush acknowledges your existence. His cheeks burned bright red, and he stared at Solari like she was a storybook princess magically made flesh.

Rafael watched the two of them talk, curiosity eating at him. After a couple of minutes, Solari gave Nat’s arm a squeeze and hurried off toward the makeup trailer. Nat gazed after her like a starstruck tourist rather than a guy who’d shared a set with her more than once.

Rafael strolled up to Nat, cradling his tea in his palms. “What was that all about?”

Nat started, blinked, and peered at Rafael with shock stamped all over his face. “She . . . um. Nothing.”

A short girl with two high ponytails leaned out the half-open door of the extras trailer. “Nat! C’mon, will you? You’re gonna be late.”

Nat half turned, his gaze still fixed in the middle distance. “Yeah. Coming.” His eyes focused on Rafael’s face. “I gotta go to makeup. I’ll see you around, though, huh?”

A Note from Ally Blue
Hello out there, lovely readers. I’m Ally Blue. Welcome to the blog tour for my new book, No Small Parts. It’s the latest addition to Riptide Publishing’s awesome Bluewater Bay universe. I love this story, I love my boys—Nat Horn and Rafael Cortez—and I’m excited to give y’all a glimpse behind the scenes. Thanks so much to my blog hosts for having me here, and thank you all for joining me! 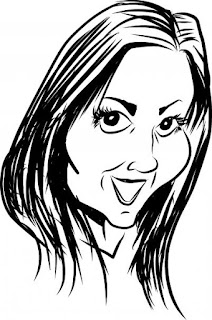 Ally Blue is acknowledged by the world at large (or at least by her heroes, who tend to suffer a lot) as the Popess of Gay Angst.

She has a great big suggestively-shaped hat and rides in a bullet-proof Plexiglas bubble in Christmas parades. Her harem of manwhores does double duty as bodyguards and inspirational entertainment. Her favorite band is Radiohead, her favorite color is lime green and her favorite way to waste a perfectly good Saturday is to watch all three extended version LotR movies in a row.

Her ultimate dream is to one day ditch the evil day job and support the family on manlove alone. She is not a hippie or a brain surgeon, no matter what her kids’ friends say.

Giveaway
To celebrate the release of No Small Parts, one lucky winner will receive an ebook from Ally’s backlist! Leave a comment with your contact info to enter the contest. Entries close at midnight, Eastern time, on December 24, 2016. Contest is NOT restricted to U.S. entries. Thanks for following the tour, and don’t forget to leave your contact info!