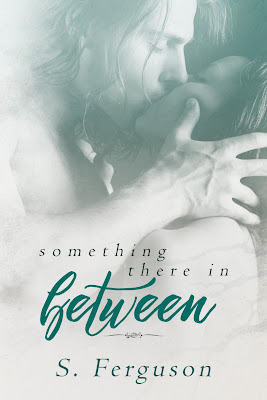 Something There in Between
by S. Ferguson
Date Released: December 19, 2016

About Something There in Between
Bree Sutton has lost everything.

Shattered dreams and a lonely park bench are her only companions.
Happy endings aren’t for people like her.

Survivor Declan James knows what rock bottom looks like.
But he knows there can be redemption, no matter how far you’ve fallen.

You can try and fight it, but love doesn't care how broken and battered you are. It's always something there in between...

This book contains strong adult content that may not be suitable for readers sensitive to hard to read subjects. 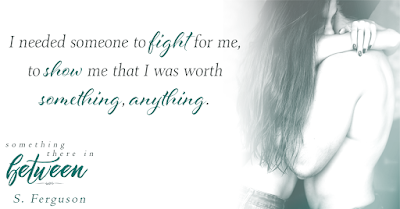 Read my four-starred review of Something There in Between.

Add Something There in Between on Goodreads. 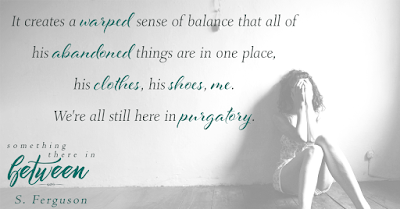 An Excerpt from Something There in Between
That does it for me.

The idea that someone is hurting her causes a rage I’ve only ever felt once before in my life to flow through my entire body. I clench my fists and decide now is the moment I confront her. Is there another asshole bothering her now? Did her douchebag ex make an appearance? I will fucking end whoever did this to her. I know without asking that Jake would have my back on that move. I’d be willing to bet money Ron would as well. It takes every ounce of strength I have, but I wait until the night is a little closer to being over before snatching her arm and pulling her through the doorway into the dark kitchen. I spin her around to the wall beside the doorway, leaning down so we’re face to face, eye to eye.

“You’re gonna tell me what the fuck is going on, and you’re gonna tell me right the fuck now. Is someone hurting you? Why are your knuckles all bruised? You been fighting?” I fire off everything at once, realizing I sound like a nagging girlfriend, but I need to know she’s okay. I NEED to get this off my chest.

Bree sighs deeply, her warm breath fanning across my neck, making me aware of our proximity. I have her pinned to the wall, my left hand is still gripping her shoulder, and my right hand is on the wall above her head. I’m being a bastard, and using my size to cage her in. I watch her closely for signs of fear, but she almost looks bored, and mostly just annoyed. I know she can still refuse to answer, but I’ll be damned if she gets away from me until I have my say.

She raises her eyes to give me an angry glare and I feel my dick twitch. Seeing fire in her eyes as opposed to the sadness they always carry makes her ten times hotter. Fuck, I’m an asshole. Something is seriously wrong with her, and I’m standing here getting turned on.

“I’ve just had a lot on my mind. I’ve been…training. You know exercising and punching a bag. That’s why my knuckles are bruised.” She raises an eyebrow at me, daring me to question her more. I smirk down at her…she has no idea who she’s messing with.

“You need to wear gloves then. You’re going to ruin your beautiful hands. You’re not actually sparring are you? ”I ask, my voice deeper than I intended. I’ve never been this close to her before, and my dick is currently trying to punch its way out of my zipper to reach her.

She glances down, and I have a moment of horror when I realize there is no way she’s going to miss my erection. I’m a healthy boy, and my jeans were already on the tight side. Her breath hitches, and she jerks her eyes back up to meet mine.

When I see the heat in her eyes, I swear I almost come in my pants like a teenager. Bree is fucking turned on by me. I can work with this. Letting go of her shoulder, I put my hand on the wall, completely closing her in, and lower my head towards hers.

“I don’t fool around with Ron’s guys,” she says softly, making no move to avoid my quickly approaching lips.

“Good thing I’m not one then,” I say, my mouth forming a smirk. I’m now so close to her lips I can feel their warmth on my own.

“YO BREE, where ya at?” I hear Jake yell from outside the door. His voice is like a splash of cold water, causing me to jerk back, and the moment is gone.

“My brother is an asshole,” I grumble, lowering my hands to adjust my erection, and backing further away from her.

“Your brother just stopped me from making a stupid mistake,” she says, before walking out of the door. 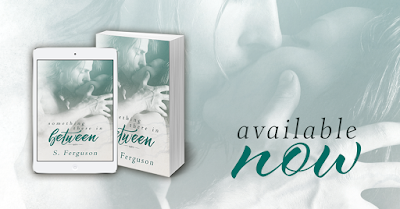 About S. Ferguson
S. Ferguson is a military wife and mother of three. She loves to find beauty in the flawed and broken.