Review: Something There in Between by S. Ferguson (In Between #1) 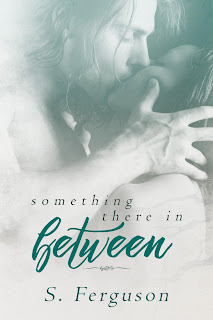 Something There in Between is the debut release of S. Ferguson and it's a new adult (NA) romance about a young woman drowning in darkness, filled with sorrow and self-doubt, who finds a guiding light in the form of a man who knows all about rejection and abuse from the person who should have loved and cared for him and his younger brother. Together, they'll discover what it means to live a life worth living and to love someone worth dedicating the rest of your life to. This was a debut that satisfied and one that I hope is the beginning of more from Keegan's.

Bree Sutton doesn't believe she's good enough. She certainly wasn't good enough for her mother who believed her lacking and never failed to remind Bree exactly that. She definitely wasn't good enough for her boyfriend who deemed her not worth the effort of informing her that their relationship had ended, deciding instead to not contact her at all. She's used to rejection and knows she will never be the kind of person that someone would choose to be with, to make her their first priority. So she lives her life with a daily routine, one that has her going through the motions. Then someone takes the place of her ex behind the bar at Keegan's and life begins to change.

Declan James wasn't exactly sure if taking a job at Keegan's was a good idea. After all, the owner, Ron was known for his criminal enterprise as much as his bar being a favorite hangout for many in the neighborhood. Being able to keep a closer eye on his brother Jake, who recommended him for the bartender position and whose job as one of Ron's guys has Declan worried. The clincher was meeting Bree. There's something about the broken young woman that calls to him, making him protective and wanting to show her just how worthy she is of everything good in life. But could Bree's issues be too ingrained and overwhelming for even someone who was falling for her to conquer?

This being an ARC, I'm going to set aside my comments about editing stuff that needed to be fixed and focus instead on the story and characters. Declan and Bree had back stories that were heartbreaking, and they were both survivors, albeit Bree was barely clinging on, what with her still wallowing in the aftermath of what her ex did to her. Yet I loved how one more terrible experience became a turning point of sorts for her, with people like Declan, Ron, and those at Keegan's prodding her to take a different path, one that would lead her towards wellness and strength, physically, mentally, and emotionally. She and Declan were no longer surviving but were truly living.

Something There in Between was really Bree's story, and I liked that while she had the support and understanding of those closest to her, it was really up to her to make the decisions and choices that would have leave her past behind and move forward. Declan was such a good guy, and he was patient and loving when it came to Bree, recognizing something in Bree that he not only related to but comprehended far too well. I do wish that there was more interaction between Declan and Jake and maybe more insight on why Greg seemed to be so pissed at Declan all the time. That ending gives me hope that Jake's story will be told in the near future and still in the direction it was last in. For a debut, S. Ferguson shows promise; I look forward to reading more from her next year. Four stars. ♥

Purchase Something There in Between on Amazon.