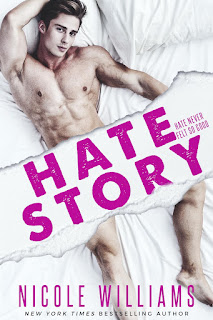 I've read many a love story, but now I've got myself Hate Story, a standalone contemporary romance from bestselling author Nicole Williams. It chronicles the relationship between virtual strangers Maximilian Sturm and Nina Burton, one that begins with an agreement to marry for the sum of one million dollars and to remain married over the span of three years in order for Max to be granted a green card. Twenty-nine-year-old Max is German by birth and only moved to the U.S. in order to pursue his collegiate studies. Over the years, however, the U.S. has become his home, with Portland being where he bases both his personal and professional pursuits. When he chooses twenty-three-year-old dog walker, coffee cart barista, and budding photographer Nina to be his bride, he does it without having no idea what she looks like or how she is away from a computer screen. The last thing Max needs or expects is to have even an iota of attraction towards her and vice-versa, so giving her a reason to hate him is best. But the more involved they become in their fake relationship, the more it feels real and hate evolves into the very thing neither one of them can afford to feel. Will falling in love be the end of their happily ever after?

Green Card starring Gérard Depardieu and Andie MacDowell was the first fictional depiction of a mutually beneficial, pre-arranged marriage I had ever encountered, though I'd already heard of true tales wherein a couple get married so that one ends up with a green card prior to the movie. Since then, there have been other films that share a similar story line, but after wracking my brain for awhile, there was only one book other than Hate Story that I can recall reading that tackled the whole green card story angle. That book had a very new adult feel to it and the characters already had an established friendship. In the case of Hate Story, Max Sturm and Nina Burton really didn't know anything about one another other than whatever minimal information they exchanged online. There was also the matter of them not exactly being fans of each other when they first met, which, of course, they both felt was best for the kind of arrangement they were entering. Neither one of them really believed that love and marriage could co-exist, Max having been burned by love once and Nina having been left behind by the people who were supposed to be the first to love her and then having the person she loved most leave her too years later.

I loved the slow burn approach in the story. It made for a more entertaining read, given that both Max and Nina were adamant about never having love or any sort of similar emotion wreak havoc on what, to them, looks like a foolproof agreement. More often than not, we know where the main characters of stories like this are going to end up, but even if the ending is a foregone conclusion most of the time, it's the journey getting there that I keep my attention focused on. It's that journey that can make or break the story, especially one that has an air of familiarity to it, but then such is life when countless romance novels are released in a year's time. My favorite thing about Nicole Williams's writing is that she brings her unique touch to every story she releases. This is my fourth read from the author in 2016 and I didn't discover her books until March of this year, and she's hooked and reeled me in every single time. Max and Nina's story doesn't go the way I expect it to but I was left more than satisfied with how these two main characters developed and the direction their tale of mutual hate (though I do think it was more of initial dislike) transformed over time into a very mutual love. I'm happily giving five out of five stars to Hate Story. ♥