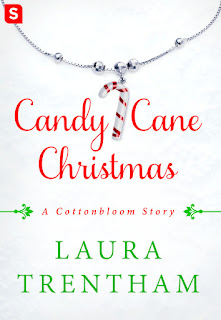 What's better than a Cottonbloom novella? A novella that has ties to my two favorite small-town romance series and oh, look at that, they're both written by author Laura Trentham! Candy Cane Christmas is about Jeremy Whitehurst, aka Whitey from the Falcon Football books and who had a small but vital role in the full-length Cottonbloom novels. If you're familiar with Jeremy's history, you'll know that he hasn't had the easiest life, not while he was still a resident of Falcon, Alabama. Even after he was given a chance to redeem himself, his past was something he could never fully get away from while he lived in Falcon. Making his way to Cottonbloom became his shot at truly starting over, and now that he's with Fournette Designs, he plans on proving that the trust and faith given to him were not going to waste. Then they get a new employee in Kayla Redmond, and with them being in closer and more constant proximity to one another, the awareness they've had for each other has evolved. But can Kayla make Jeremy believe in himself, in the possibility of falling in love, and in the magic of Christmas once again?

I've had this title with me since September, but I confess that I've been holding off reading it because I wanted to wait till December, what with the whole Christmas theme and all. Was it worth the self-imposed wait? Yes, indeed, it was. I love me a good Christmas story, but when it's part of a series that's already got a spot on my year-end list of favorites AND the novella lives up to my high expectations, then it's like getting a gift that's equal parts nice and naughty that I asked Santa for. Jeremy is one of those supporting characters that you never forget, and I'm thrilled that he got his own happily-ever-after and with someone who also deserved her shot at being with a good guy who had the whole outer bad boy appeal going. Soon-to-be college graduate Kayla was exactly who Jeremy needed, especially with his life falling into place piece by piece with him in his mid-twenties. The Christmas Eve moment between the two of them brought a smile to my face and a happy squeeze to my heart. Candy Cane Christmas may have been Laura Trentham's first Christmas story, but I hope it won't be her last! This gets five stars. ♥

Then He Kissed Me (book two) - five-plus stars - My Review

Till I Kissed You (book three) - five-plus stars - My Review