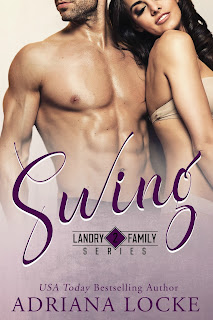 He takes a deep breath, his eyes troubled. "I like you. I really fucking like you. You make me remember what it's like to be...more than me."

"You don't need to be anything more than you are."

The Landry Family series continues with the second novel, Swing, and Adriana Locke doesn't disappoint as she shares the story of youngest Landry son, Lincoln, and Ryan Danielle Ashley. Lincoln is a professional baseball player for the Tennessee Arrows and is considered the best center fielder the major leagues. His shoulder injury, however, puts into question his future with the team, making Lincoln far more worried than he'd care to admit. Baseball is the one thing he believes he's best at. Without it, he's afraid he'll feel lost and not live up to his older brothers. Then he meets a woman who helps ease his worries and sees him as the man he is and not the superstar player who has a life envied by many. He knows Danielle Ashley wants him as much as he wants her. So why does she seem eager to distance herself from Lincoln? He's ready to pull all the stops to hit a home run with the woman he can't stop thinking about or wishing to have more with. And while Danielle has always promised herself to never fall in love with an athlete, Lincoln tests her limits and makes her want the thing she shouldn't--a future with him.

Every single time Lincoln made an appearance in the first novel in the series, Sway, it was difficult to focus on anyone else. The guy simply demanded your attention and he deserved to have all eyes on him. I'm glad that his story was the second to be told, although there's no denying that the two other brothers waiting in the wings--Graham and Ford--have me itching to learn more about them as the series progresses. There's a lot about Lincoln that rings familiar with other athletes who are main characters in sports romances that I've read, but he's also something about him that sets him apart from them. Maybe it's the overall charm and appeal and how he owns the confidence and swagger but doesn't overdo it. Maybe it's the simplicity of his characters and his love for family and how he has his own fears hidden beneath the bravado that have me wanting to give the guy a hug. His being the youngest Landry has him feeling the need to prove himself, believing that without baseball, he'd be like a boat without a rudder, but goodness, that scene with his dad at the Farm had me a bit teary-eyed. It felt so very sincere.

My heart went out to Danielle the more I got to know her story in this second Landry Family novel. How that independent, intelligent, and caring woman could have been the product of parents like hers is beyond me, but kudos to the entire Landry clan for how they took her in. Major smiling on my end during the whole Thanksgiving part of the book. Whatever faults each individual Landry may have is overshadowed by how they come together as a family, which is what I believe is the overall appeal of the series. This was a markedly different book from the one that came before it, yet they were both such wonderful reads that left me more than satisfied. I've only managed to read these two aforementioned by Adriana Locke, but I'm already a fan. The third book in the series, entitled Switch and featuring always in control Graham, is already on my to-be-read list but I'm also curious about her other series and standalones. Suffice it to say that I'm seriously considering adding her as one of my go-to authors, and if her writing is as amazing as what I've seen so far, that's going to turn into an inevitability. Five-plus stars for Swing. ♥