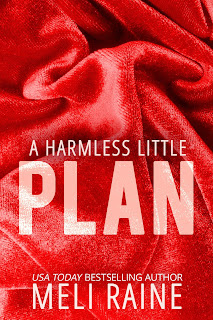 A Harmless Little Plan is the third and final book in Harmless, a romantic suspense thriller series with political undertones and penned by bestselling author Meli Raine, a pen name used by Julia Kent. In the span of about three months, this series kept readers on the edge of their seats with the story of twenty-two-year-old Lindsay Bosworth and her journey of employing her own brand of justice and revenge on those who destroyed her world as she knew it four years ago. It's only been three weeks since she returned from isolation and banishment and while she isn't entirely if she can or cannot trust him, her heart still belongs to the boy she loved--Andrew Foster. She has a plan in play, but it seems that those who hurt her four years prior have a plan of their own, and it looks like this time around, they're all in, ready to double down on everything they did to Lindsay and Drew before. They may have beaten and broken Lindsay four years ago, but the Lindsay they've got is anything but innocent or harmless. Drew has trained but Lindsay has plotted her vengeance. The men who hurt them are about to find out exactly what she's made of. Their mistake was letting Lindsay live; now she'll bring every single one of them down.

Holy. Wow. No words. When all the truths that readers and fans of this trilogy finally came to light, I was aghast to learn just how far-reaching everything that happened four years ago and what was happening now was. Lindsay Bosworth may have been a victim back then, but she sure as hell isn't one now. Could I love this heroine any more than I already do? It was easy to see how independent and brave she was in the first two books, but the woman she is in this third one proves just how formidable an opponent she can be. She's kickass but she also doesn't pretend to not need rescuing when the occasion calls for it. And Drew was just...le sigh. Goodness, I knew he loved her--he never really stopped in the four years they were not together--but here, he was in awe of her. He may have been driven by revenge as well, but it was his love for her that became his true driving force and how can you resist a guy like that? I loved this entire series and it's made me into a Meli Raine fan, so I'm itching to read her first two trilogies as well. I know Mark Paulson's story is one of them, but I hope Silas Gentian gets his story told, too. Told in dual viewpoints, A Harmless Little Plan is the culmination of absolutely fantastic storytelling. Five-plus stars. ♥

Read my reviews for the Harmless series:

A Harmless Little Game (book one) - five stars - My Review