A Note from Cristin Harber
I am excited to announce the Titan World stories! From military romance and romantic suspense to contemporary romance and paranormal, a few of my favorite authors have jumped head first into our heart-pounding world and penned their stories with Titan twists. You will see familiar characters from popular, bestselling series as they collide in fantastic collaborations! Plus I’m excited to introduce two debut authors who you may already know if you are familiar with all things Team Titan.

We’re featuring a few of the participating authors every hour for the next few hours! Check out the information on two of the Titan World stories below. 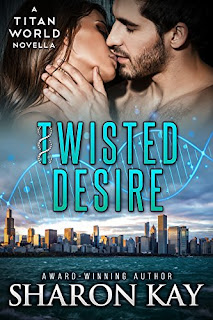 Rhys MacLeod is a warrior first and a hacker second. Preserving the balance of power among supernatural beings is his prime directive, as well as keeping it far from human eyes. The discovery of a man killed by magical force on a Chicago street lands him on an op he didn't expect. He's good, but solving this crime requires a call to the best of the best.

Parker Black of Titan Group never met a network he couldn't infiltrate. Along with Titan team member Locke Oliver and Megan, a scientist who witnessed the murder, they uncover a maze of encrypted files and unethical DNA manipulation.

Rhys is duty bound to keep all supernatural details hidden from his human friends, so identifying the killer becomes more complicated when clues indicate the perp isn't human. And when the murderer shows up at their location, every second counts before its true nature is revealed. 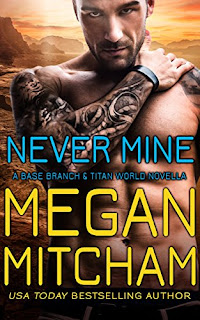 Jillian Cooper never wanted Callum, until a dream morphs him from her best friend's husband to a singular nocturnal fantasy. Revolted by her own mind and loyal to a fault, she refuses to give the dream life. Still, it manages to make her awkward around her only family; Amery, Callum, and their two stunning daughters. As an orphan and an Explosive Ordinance Tech with the Navy, things have a way of crashing down around her. The world crumbling call came in the form of a single car, single fatality accident. Amery died.

While she spins in dizzying circles, the girls she's loved since they were in their momma's belly cling to her. When Callum's strong arms fortify them and keep them all from falling apart, Jillian's inner struggle reaches a breaking point. She does the only thing she can to honor her friend's memory...run to the other side of the world to contract for Titan Group, an elite private securities force in need of an EOD.

Callum Bradfield adapts and overcomes. Even after the tragic death of his wife, his core values as a Navy SEAL march him forward...to safer waters. His gig as mission transport for Base Branch—the special operations force for the UN—isn’t as adrenaline laden, but he refuses to make his girls orphans.

Things are beginning to regroup when Jillian bales on his girls—and him—without a word. To ensure she's safe, he hacks her personal information and follows the crumbs into Titan's database. Crossing that line gets them both under a microscope in the middle of a desert, searching for the proof they need to show their innocence, while he tries to convince Jillian he's more than just her dream. 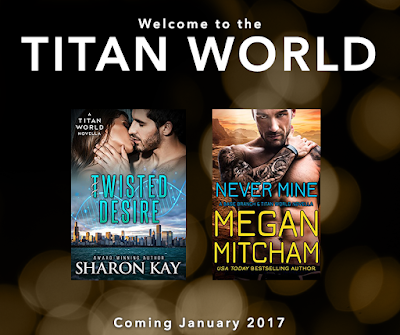 A Titan World Quick Q&A
Am I writing a story too?
You betcha! Déjà vu will be Doc Tuska’s story. He’s not a Titan team member, but he is a familiar and constant face in the series—perfect for Titan World!

Which Titan characters will be in the other author’s stories?
The authors had free rein. Some took on Titan like missions while others wrote backstories to characters and expanded on their families. They took scenes from current Titan books and expanded in a new direction.

What is the reading order of the Titan World?
There is NO READING ORDER. (Even if one of the retailers has randomly assigned a series number. Ahem, I’m looking at you, Amazon.)

When will the books release?!?!
They will release at all retailers on January 24th! iBooks will release them early if you cannot wait! Get your hands on them on January 16th on iBooks.

Sign up for the Titan World newsletter
AND several lucky winners will receive advance copies of
ALL Titan World ebooks.