Review: Meet Me Halfway by Kim Carmody (Off Field #2) 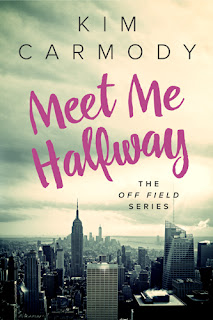 Twenty-seven-year-old Olivia Callahan has always had her eye on the prize. She has her life planned out and has no intention of something as mundane as being a woman in a male-dominated industry stop her. When she's given the opportunity to prove herself, she jumps at it. Putting together a documentary with the first round draft pick in professional football won't be easy, but she's ready to pull out all the stops. She's going to make this a documentary that no one's going to forget, one that will cement her name in sports journalism. And when she meets college senior and incoming New York Warrior Nate Sullivan, she believes she's hit the jackpot. He's got a story to tell and while he may have been wary to be open about his past, he seems to be forthcoming. But soon, the line between personal and professional blur, and the five-year age difference is small potatoes compared to Olivia and Nate engaging in things they shouldn't be. Their attraction is beginning to give way to something more, but with Nate protecting his privacy and Olivia ready to make his past public, will they be able to meet halfway?

Meet Me Halfway is the second novel in Kim Carmody's Off Field series and while it shares some of the humor the series starter, Lexington and 42nd, had, there's more angst-driven drama here. I really loved Nate Sullivan, who at twenty-two, was mature and had a good head on his shoulders courtesy of having received some hard-learned lessons when he was a bit younger. Admittedly, I found it more difficult to like Olivia Callahan. I admired her drive and ambition, but maybe it was her lack of sensitivity to Nate's situation that got to me. In chasing any dream, there has to come a point where you ask yourself just how far you're willing to go to achieve it. I liked the idea that Olivia was older than Nate, although he seemed a tad more mature than she was. Yeah, yeah. I really wasn't an Olivia fan, although she did redeem herself before the book ended. Taking everything into account, this was a good follow-up to the first book and the author's writing continues to impress. I'm looking forward to seeing who she has in store for readers as the Off Field series moves into 2017. I'm giving Meet Me Halfway four out of five stars. ♥

Read my reviews for the Off Field series:

Lexington and 42nd (book one) - four stars - My Review