Review: Everything for Her by Alexa Riley (For Her #1) 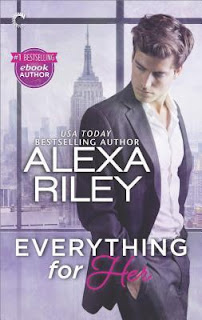 Note: This ARC was provided by Carina Press in exchange for an honest review.

This series starter is quintessential Alexa Riley, retaining almost everything fans and readers love about the author's stories, but taking it all to a higher level. Yes, in terms of quantity, this is a longer read, but the quality of the writing is ramped up a couple of notches as well. We get the nitty-gritty about the main characters, twenty-seven-year-old billionaire Miles Osbourne and twenty-two-year-old Osbourne Corporation intern Mallory Sullivan, while also learning enough about the supporting characters whose story is up next, Paige Turner and Ryan Justice.

Mallory Sullivan grew up in the foster system, but she's been fortunate. She has a best friend she considers her sister and she's now an intern with the very same corporation that gave her a college scholarship. Meeting and falling for Miles Henry--her Oz--is the new good thing in her life. But there are things about Oz that Mallory knows nothing about, things that, when unraveled, could spell the end of what's just beginning between the two of them. However, what's merely starting for Mallory has been growing steadily for Miles for the past five years, to the point he would do anything and everything for the girl--the woman--who has changed his life and that he's in love with.

It was obvious who Oz was from the moment they "met" in the club and me being the paranoid overthinker that I am, I had my suspicions about one other character from the get-go. Even with those proverbial cats out of the bag, I thoroughly enjoyed this story. Miles clearly had stalker-like tendencies, toeing the line between creepy and sweet, if there were such a thing. I do find it a bit odd several supporting characters didn't seem to be all that bothered by his obsessiveness when it came to Mallory, but I guess this is where you need to suspend your disbelief. I wasn't a big fan of Mallory acquiescing to a lot of his demands, but she did hold her own some of the time, though not enough in my opinion. It's a good thing Miles truly cared about her and wasn't just some domineering alpha male.

The sex between Mallory and Miles is plentiful and it's hot, so longtime fans of Alexa Riley who are used to the ultra steamy stuff won't be disappointed. There's insta-love coming from one of the main characters, but we do get to see their love story evolving once they're together, so there is development and growth and there are major hurdles that they have no choice but to overcome if they have any hope of surviving beyond whatever shelf life expiration date's been stamped on them by doubters and naysayers around them. The multiple epilogues is very much an Alexa Riley thing, and I found those quite satisfying, earning multiple smiles on my end. If anything shocked me, it was the sneak peek at the second book, one I'm excited to read! Five stars go to Everything for Her. ♥

Purchase Everything for Her on Amazon.