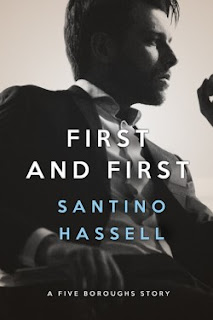 “Tell me.” I pressed our faces together again. “Please just tell me.”

“Fuck.” Oli clung to me and closed his eyes. “Fuck, Caleb. I don’t know what to say. How to explain.”

Tell me you love me.

The words were in my head, but for a fraction of a moment, I thought I’d said them aloud. I felt instantly pathetic. Even worse, because I really wanted it. I foolishly, desperately wanted it. For someone to love me. For him to love me. But I knew he didn’t, and I knew no one else did, and God but that was an awful feeling to have.

Caleb Stone was introduced in the Five Boroughs series as David Butler's ex-boyfriend, and while he may have come off as a stiff-as-a-starched-collar businessman, he certainly has an interesting story to tell in First and First, one he shares with Oliver Buckley, also introduced in the same novel as Caleb, Sunset Park. He may have achieved a great deal of success and has more than sufficient wealth at his fingertips, but Caleb constantly feels the pressure from his family to not just meet but exceed their expectations of him. Such is the life for someone who's from the Upper East Side. He may be openly gay, but he's not supposed to rock the boat or veer away from whatever path has been set out for him. But after losing the man he loves to someone else, Caleb knows it's time to make a few changes...but where does he even start? When he has a chance encounter with Oliver Buckley on New Year's Eve, Caleb finally knows what--who--he wants and it's Oli. They're both gay and in their thirties, but they're seemingly different men. Caleb may trust Oli to loosen the ties that bind him, but can he now entrust his heart with this man?

What is up with this series?! Is it really fair that it's able to maintain such a level of superbness with each new book that's added to it? First and First is Santino Hassell's third Five Boroughs novel and the story that Caleb and Oli share is different from those of the two couples that came before them. Caleb is the kind of guy who probably colored within the lines, while Oli may have taken whatever creative license he wanted to. There wasn't really much known about either one of these characters in the second novel in the series, but I confess that I was more surprised with Oli's life story compared to Caleb's, yet it perfectly explains why he's more carefree and independent compared to Caleb. I liked how Oli nudged, pushed, shoved Caleb whenever necessary in order to for him to be more honest with his wants and needs and to no longer allow himself to be limited by the expectations placed upon him. The sexual activities they get into are far more risque compared to the Rodriguez brothers and their respective boyfriends, but don't doubt that there's a meaningful tale there. Five-plus stars for First and First. ♥