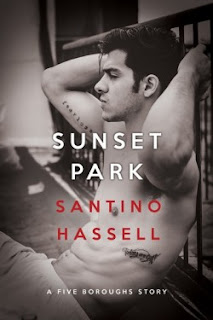 The feeling of not measuring up. To anyone.

I didn’t measure up to my friends, but they’d known me long enough to have seen it coming years ago. I’d fallen right into the position everyone had expected. No one asked questions. No one even thought I cared. Some people even thought my lack of concern was admirable. I wasn’t conforming. I was true to my word, and no one had ever been able to mold me into anything I didn’t want to be.

But off my block and outside of my old neighborhood, things were different.

From the moment Raymond Rodriguez and David Butler sat side-by-side while visiting Michael Rodriguez in rehab, I had a feeling these two were going to be a curiously adorable pairing. Raymond is twenty-five and has just lost the first job that he felt was worth doing. He knows his brother is going to be disappointed--yet again--but Raymond is waffling on telling him...that is, until Michael decides to put their family home up for rent, forcing Raymond to move out and find a place to live. Twenty-four-year-old David steps in, announcing that he's moving out of the apartment he shared with his now-ex-boyfriend, and volunteers himself as a possible roommate for Raymond. In the past few months since they met, Raymond and David have grown increasingly closer, having reached a comfort zone while kinda-sorta-maybe toeing the line between the friend zone and the zone that David believes is reserved for his one-sided fantasies. But maybe Raymond isn't as straight as David once thought him to be, and once they're in close quarters and one unexpected admission, David makes Raymond one tempting offer...

Raymond, Raymond, Raymond. He's nothing like he's brother, but as much as I like Michael, I'm glad Raymond is different. He's his own person, even if he is a tad lost and somewhat rudderless in an ocean of possibilities. Of course, Raymond doesn't quite think those possibilities are open to someone like him. He's realistic but he also doesn't want to keep disappointing Michael, so he tries to suck it up and stick with the job that he finds himself doing, no matter how much he actually hates it. The one bright thing in his life is David, but Raymond isn't exactly slapping a label on himself. He's been with women and he's engaged in threesomes, but he's never been with a guy. That doesn't mean he isn't curious, and his curiosity was initially sparked years ago, with it now reaching it's peak with David, who was more than willing to help Raymond figure out if he wanted to take the plunge or to dip his toe instead. But you know what they say once someone gets a taste of something they've been craving for for so long... Santino Hassell has given readers a fantastic follow-up with Sunset Park, which easily gets five-plus stars. ♥