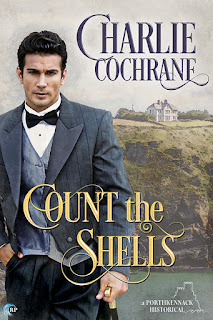 Count the Shells, the second historical romance and the sixth overall book in the multi-authored Porthkennack series, and it's a story set post-World War I with an unexpected affair between a former soldier and the younger brother of his first love. Michael Gray reminisces about all his past loves while spending time with his sister's family in Porthkennack. The greatest of these loves is Thomas Carter-Clemence, but while Michael returned from the war, Thomas never did. Porthkennack holds fond memories for Michael, memories that he shared with Thomas and memories created between the Grays and the Carter-Clemences. It is also in Porthkennack where Michael has an unplanned reunion with Harry, who was always the Carter-Clemence who liked to tag along with best friends Michael and Thomas even if he was four years younger than them. Harry's unerring likeness to his late brother shocks Michael, drawing him towards the younger man. They engage in a relationship of sorts, one that has Michael coming across shocking and painful secrets from their families' pasts that could change too many futures.

I've enjoyed Charlie Cochrane's writing in the past, specifically her Lindenshaw Mysteries books, plus her Cambridge Fellows series have come highly recommended. Her first Porthkennack story was a good read, and I was looking forward to seeing how she would fare going from contemporary to historical in this series. If we're talking about intrigue, there was certainly a lot of that, particularly in the latter half of the book. There's a twist in the story that could very well affect both Michael's and Harry's families, but I'll leave that for you to discover if you decide to pick up this book. Suffice it to say that at the heart of it is the one man they both loved. But as much as I loved the intrigue, I did find the pacing of the story rather slow, to the point that I was sorely tempted to skim just to get the tale moving forward much faster. Then there's Michael's need to count each man he's "loved" and his reaction to the secret. It would be difficult for me to explain why the latter bothered me without mentioning spoilers, so let's just say the man's anger seemed to linger far too long on just one person, making me question his own supposed feelings for Harry. I do wish Count the Shells was more mellow drama than melodrama. Three stars. ♥