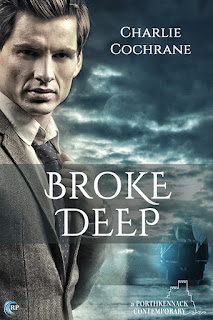 Broke Deep is the third release from the multi-authored Porthkennack series and is one of its contemporary stories. Written by Charlie Cochrane, this latest standalone brings together web designer Morgan Capell and amateur historian Dominic Watson. Reeling from the unexpected end of a relationship while worrying about his mother's dementia, Morgan receives an unexpected call from Dominic. Porthkennack is an area rich in history, some of which may be shrouded in mystery, and there's one particular mystery that Dominic is hoping to get answers to. Both the Capell and Watson families have ties to one particular ship wreck--that of the Troilus that happened two centuries ago. When clues point to the only survivor of the wreck possibly being murdered, Morgan joins Dominic in his quest for the truth. Morgan has had recurring nightmares of Troilus, and they appear to have grown in frequency ever since Dominic arrived and began digging deeper into the wreckage. Could Dominic be key in healing Morgan's broken heart? Can he convince Morgan that his mind may not be as broken as he deems it to be?

It took me awhile to get into this new story set in the Cornish town of Porthkennack, but I have read some of the author's books in the past and have always been left satisfied, so I stuck it out and by the end, I'm glad that I did. This had both romance and mystery, with both elements slowly but surely unfolding as the story went on. I confess that there were definite moments that I seriously wanted to smack Morgan for his behavior towards Dominic. There's a saying that goes "It's all in your head," and in the case of Morgan, the man spends waaaaay too much time IN his head, leading him to over-think and over-analyze. Sigh. But while the romance frustrated me a teeny, tiny bit, I really liked the mystery aspect of the story, especially how everything seemed to tie together. The side story about Morgan's mom and her battle with dementia--a battle that wasn't hers alone since health issues like this one are often shouldered by one's family and loved ones as well--had me empathizing with Morgan as well. While Broke Deep may not be my favorite in the Porthkennack series, it remained an interesting, four-starred read. ♥