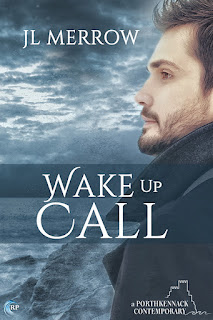 Wake Up Call is the first novel in the multi-authored Porthkennack series--which has both contemporary and historical stories--and was penned by JL Merrow. It's about Devan Thompson, a twenty-four-year-old mechanic from London vacationing in Porthkennack and hoping to meet someone from his past and finally get the answers he seeks, and Kyle Anthony, a thirty-three-year-old former barrister from Surrey who moved to the area after one diagnosis that led him to leave behind a career he loved, a man he thought loved him enough, and a life that he believed he would never get back. Neither man was expecting the impact the other would have on their life, but with Dev returning to London after three weeks and Kyle unsure on whether to stay where he's at or to move back to Surrey, what hope could these two actually have for anything more than a fling in a town called Porthkennack?

This was certainly a good start to a new series! While each book has a different couple and may be read independently of each other, the author introduces readers to Porthkennack, a town steeped in history that has townsfolk who appear to have their own storied histories as well. Wake Up Call was a slow burn romance, one with main characters who appeared to be opposites but were like that breath of fresh air that the other didn't know he needed. Kyle's narcolepsy and Dev's quest to know who he is gave both men interesting back stories, but the peripheral characters were just as enthralling, especially Ceri Harper, who didn't seem to be all too welcoming, but was someone whose life's experiences made her the way she was. There were a couple of colloquialisms I wasn't familiar with, but the author made sure to explain them in the text. I'm giving Wake Up Call four out of five stars. ♥