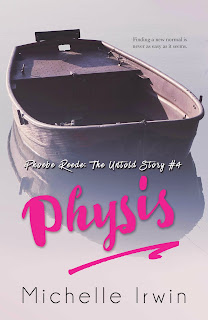 Oh wow. Could this series tear out even more pieces of my battered heart? I could only imagine what Phoebe Reede went through when she was abducted in Beastly, and readers had an idea of the torment the boy she loved, American race car driver Beau Miller, and the father that adored her, driving legend Declan Reede, experienced in both Beastly and Decay. Now, however, we see the aftermath of it all in Physis, the fourth full-length novel and fifth overall release in Michelle Irwin's Phoebe Reede: The Untold Story series, and it unfolds in such torturous ways. Phoebe is no longer the same girl that her family, boyfriend, and friends knew. She's broken and attempts at putting her back together will continue to fail because the pieces are no longer complete. She once was the girl ready to conquer the world and make a name for herself. Now, she needs to figure out the Phoebe staring back in the mirror and if she decides to remain in the darkness she's currently in or if she can still have a life worth living...

First things first--this series needs to be read in order. You don't necessarily need to read the Declan Reede: The Untold Story series--which is the love story of Phoebe's parents--but hey, if you're all about getting the full reading experience, you could certainly read that first, but it's not a deal breaker. To have met Phoebe in Phase and seen her find and lose love both there and in Phobic, and then see her taken in Beastly and what remains of her in Physis made my heart go out to her all throughout this latest novel. Michelle Irwin has never failed to stir my emotions with her writing and while Phoebe's story is the first collection of books from her that I've read, when I see her attached to a title, I'd be stupid to not pick the book up. I refuse to give any details about this part of her story because, yes, you do need to read it on your own. A quick check on Goodreads has two more titles slated for the series--Phantom and Beacon--and I can't wait to continue Phoebe's journey. I'm giving Physis five of five stars. ♥

Read my reviews for the Phoebe Reede: The Untold Story series: